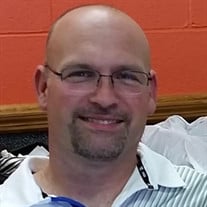 PARSONS, James “Jamie” A., age 47, of Wilmington, passed away unexpectedly Fri. Oct. 12, 2018. Growing up as an Army brat during his childhood, and living in Missouri during his teenage years, Jamie graduated from Waynesville High School, class of ’89, in Waynesville, Missouri. He proudly served in the US Army during the Desert Shield era. He has been working as a machinist for the past 19 years at Ferno - Washington in Wilmington. After getting married and having his sons, he became very active in the Boy Scouts of America. He served as Den Leader for Cub Scouts Pack 155 and was currently serving as the Assistant Scout Master for Boy Scout Troop 999 in Chester Township. Jamie loved spending time with his two sons and the Boy Scouts. His favorite times were the many camping trips where he would often volunteer to do the cooking. Funny, smart, and kind, Jamie will be remembered for his loving and supportive personality. In addition to the Boy Scouts, he also enjoyed taking the family to Reds games, diet Mt. Dew, and his dogs, especially his girl, Sparkle. He will also be remembered for the enjoyment he received from his family for decking the house out for the holidays, and was especially known for making birthdays a special event. He is survived by his wife of 19 years, Tammy; two sons Landon and Joshua; his parents James “Jim” Parsons Sr. and Karen (Terry) McComas; sister Kimberly (Brian) Courtney; and two nephews Connor and Logan Courtney. A celebration of life service will be held 11 AM Wed. Oct. 17 at Stubbs-Conner Funeral Home in Waynesville. The family will receive friends 4-8 PM Tues. at the funeral home. If desired, contributions may be made to Boy Scouts Troop 999, 652 Blazing Trail, Oregonia, OH 50554. Condolences at www.stubbsconner.com.

PARSONS, James &#8220;Jamie&#8221; A., age 47, of Wilmington, passed away unexpectedly Fri. Oct. 12, 2018. Growing up as an Army brat during his childhood, and living in Missouri during his teenage years, Jamie graduated from Waynesville... View Obituary & Service Information

The family of James "Jamie" A. Parsons Jr. created this Life Tributes page to make it easy to share your memories.

Send flowers to the Parsons family.