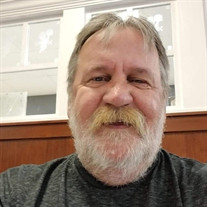 SHUTTS, James A., age 60, of Clarksville, passed away Thursday, April 9, 2020 at his residence. James was born September 23, 1959 in Hamilton, Ohio to Donald and Mary Shutts. Loving, caring, and funny, James was family oriented and faithful to his wife. He put others first and took great pride in taking care of his wife and family. He had a great sense of humor and was also known to be a jokester from time to time with people. For about five years, he owned Jim's Donut Shop in Clarksville, always saying that was his dream job. He also enjoyed buying and selling things for profit, finding a treasure out of other people’s junk. He had a knack for fixing and reselling things. He also enjoyed visiting the casinos and playing the lottery from time to time. Back before the Cash Explosion show, he even made an appearance on the Ohio Lottery’s Make Me Famous, Make Me Rich television show, and actually won a small cash prize. In addition, he always had an appreciation for old clocks and Native American artifacts. Among many things, he will be remembered for how much he enjoyed breakfast, especially biscuits and gravy, and for how much he enjoyed his pekingese dog, Lexi. He was preceded in death by his father, Donald Shutts; one brother Gary Igo; brother-in-law Ralph Mottashed; and father-in-law Kenneth Powell. He is survived by his wife of 36 years, Debbie; daughter Brandy Shutts; son Jeremiah Shutts; his mother Mary Shutts; his sister Linda Mottashed; four brothers Mark (Sharon) Davis, Steve (Teresa) Shutts, Mike (Saundra) Shutts, and David Shutts; and mother-in-law Nora Powell. Funeral services will be held 11 AM Tuesday, April 14 at Stubbs-Conner Funeral Home in Waynesville. Burial will be in Miami Cemetery, Corwin. Pastor Joe Shutts will be officiating the service. The family will receive friends 6-8 PM Monday at the funeral home. Condolences at www.stubbsconner.com.

SHUTTS, James A., age 60, of Clarksville, passed away Thursday, April 9, 2020 at his residence. James was born September 23, 1959 in Hamilton, Ohio to Donald and Mary Shutts. Loving, caring, and funny, James was family oriented and faithful... View Obituary & Service Information

The family of James A. Shutts created this Life Tributes page to make it easy to share your memories.

Send flowers to the Shutts family.