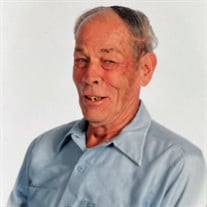 WALTERS, James “Jim” E., age 87, of Oregonia, passed away Thursday, March 17, 2022, at Hospice of Butler and Warren Counties. Jim spent the majority of his life working as a tree surgeon. He worked nearly 30 years for Woody’s Tree Medics in Moraine, performing such tasks as climbing, cutting, trimming, and removing trees as they age or following weather events. Earlier in his life, he worked 13 years for Dayton Tire and Rubber but ultimately found himself drawn to tree service work during that time too. Over the years, he attended Full Gospel Tabernacle, where he had tremendous faith in God and read his Bible cover to cover many times over. Family-oriented, humble, giving, and caring, Jim found the most joy in his life when spending time with family, especially his grandchildren and great-grandchildren. Whenever his young family members visited, he would literally gleam with joy and mention for days all of the new current event details that he learned during their visits. Always supportive of his family and friends, he never wanted gifts given to him but preferred to be able to provide gifts for them. His hobbies included playing chess and caring for his backyard birds. He played chess for over 40 years and even participated in a couple of tournaments. Obviously, he took great pride in teaching his grandchildren how to play. As far as traditions, while his children were young, he enjoyed taking them “down-home” to visit his family. In addition, some of his most treasured memories included the Christmas dinners and reunions that brought his family together. He was preceded in death by his wife, Carol, in 1985; one son, Tom Walters; his parents, Stanley and Laura Walters; six brothers, Frank, George, Stan, Ernie, Ted, and Dave Walters; and two sisters, Mary Keaton and Hazel Lamb. He is survived by seven children, Linda Renner, Barbara Mason, Jimmy Walters, Raymond Walters, Marla Walters, Dana Walters, and Carol (Jim) Nelson; 13 grandchildren; 30 great-grandchildren; seven great-great-grandchildren; and daughter-in-law Linda Walters. Funeral services will be held at 11 AM Wednesday, March 23 at Stubbs-Conner Funeral Home in Waynesville. Burial will be in Miami Cemetery, Corwin. The family will receive friends 5 - 8 PM Tuesday at the funeral home. If desired, contributions may be made to St. Jude’s Children’s Research Hospital. Condolences at www.stubbsconner.com.

The family of James "Jim" E. Walters created this Life Tributes page to make it easy to share your memories.

Send flowers to the Walters family.