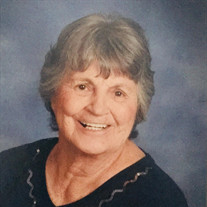 SAUNDERS, Janice C., age 76, of South Lebanon, passed away Sun. March 4, 2018 at Bethesda North Hospital. She was born June 21, 1941 to Joseph and Corena Davis in Bear Creek, KY. Janice retired in 1989 from Sumco in Maineville. Following her official retirement, she went back to work as an administrator at their family owned business, J.B.S. Inc, for another 10 years. Sassy and spunky, Janice was also kind hearted and always looking to help others. She was fiercely protective of her children and greatly enjoyed taking care of and spending time with her grandchildren. Her husband was her everything and they did all things together. A faithful member of the Lighthouse Harbor Free Pentecostal Church in Lebanon, she also enjoyed singing and listening to music, sewing, and gardening. Janice was preceded in death by her son Steven Bach, one great granddaughter Whitney Neal, her parents Joseph and Corena Davis, one brother Virgil Davis, and one sister Joyce McIntosh. She is survived by her husband of 53 years, Bob; four daughters Carol Carey, Cheryl (Tim) Drew, Arlene Lewis, and Lana (David) Taylor; 15 grandchildren; 22 great grandchildren; three brothers Glen (Gloria) Davis, Charles (Pat) Davis, and Dennis (Tammy) Davis; sister Shelia (Terry) Chandler; brother-in-law Jim Saunders; and sister-in-law Joyce Couch. Funeral services will be held 1 PM Fri. March 9 at the First Baptist Church in South Lebanon. Larry Isaacs will be officiating the service. Burial will be in Deerfield Cemetery in South Lebanon. The family will receive friends 6-9 PM Thurs. at the church. Stubbs-Conner Funeral Home in Waynesville is serving the family. Condolences at www.stubbsconner.com.

The family of Janice C. Saunders created this Life Tributes page to make it easy to share your memories.

Send flowers to the Saunders family.