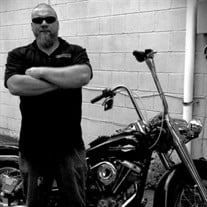 BAKER, Jason C., age 48, of Hamersville and formerly of Waynesville, passed away Monday, February 21, 2022. Jason was currently employed at BCI. He was an extremely hard worker and always working toward business opportunities; he previously owned and operated a motorcycle shop and a heating and air business. In addition, he was currently building his own home and plowing snow on the side. Funny, friendly, loyal, giving, family-oriented, and always the life of the party, Jason had a big heart and never met a stranger. He loved life and lived it to the fullest. He loved motorcycles, cars, dirt bikes, and boating. Over the years, it became a summer tradition for him to spend time at Norris Lake with his family and friends. Staying in a friend’s floating house, he cherished the time out on the water boating, wakeboarding, swimming, playing games, and listening to good music from morning till dark. He also enjoyed the many scenic trips out west on his motorcycle, with the ultimate goal of getting to Sturgis during the big motorcycle rally in August each year. Among many things, he will be remembered for how much he enjoyed his naps, which occurred quite easily and without much plan in advance. He is survived by his fiancé, Kim Golden, together 12 years; his daughters, Josie and Jessie Baker; his parents, Charles and Diane Baker; two brothers, Chad Baker and Matt (Brooke) Baker; his fiancé’s children, Carly Keeton, Nate Golden, and Faith Golden; nieces, Madison, Reagan, and Shayne Baker; and nephew, Lane Baker. The family will receive friends 4 - 8 PM Thursday, February 24, at Stubbs-Conner Funeral Home in Waynesville. A funeral service will be held at 1 PM Friday at the funeral home, followed by a committal service in Miami Cemetery, Corwin. Pastor Josh Dixon will be officiating the services. If desired, contributions may be made to St. Jude Children’s Research Hospital. Condolences at www.stubbsconner.com.

BAKER, Jason C., age 48, of Hamersville and formerly of Waynesville, passed away Monday, February 21, 2022. Jason was currently employed at BCI. He was an extremely hard worker and always working toward business opportunities; he previously... View Obituary & Service Information

The family of Jason C. Baker created this Life Tributes page to make it easy to share your memories.

BAKER, Jason C., age 48, of Hamersville and formerly of Waynesville,...

Send flowers to the Baker family.