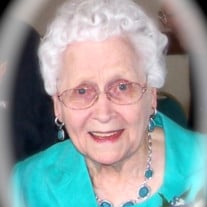 BURROUGHS, Jessie Blanch Orahood, age 94, of Waynesville and more recently residing at St. Leonard’s Retirement Community in Centerville, passed on April 27, 2014, with her family by her side. Jessie was born on April 10, 1920, in Urbana, OH, to Benjamin and Angie (Petty) Orahood, one of 10 children, three sons (Clarence, Walter and John Orahood) and six other daughters (Flora Tomlinson, Mary Hardman, Mable Boster, Margaret Hammett, Christine Billet and Ruth Sowers). Jessie is survived by her son Dr. Guy Edward “Ed” Burroughs Jr. (Christine) of Lebanon; her daughter Mrs. Karen Lee Siegert (Michael) of Sumter, SC; grand children Scott (Angie) Hargett, Dayton; Jessica (Daniel) Tucker of Loveland, OH; and Gregory Burroughs of Nashville, TN; 3 great grandsons, Casey, Aidan and Nicholas Hargett of Dayton; her sister Margaret Hammett of Phoenix, AZ; and friend of the family Robert Hargett of Dumfries, VA. Jessie and her siblings grew up in Springfield, Clark County, Ohio, and in about 1938 she moved to Warren County with her sister Flora, where she met and married Guy Edward Burroughs on November 8, 1942. She worked at NCR during the war, and when Guy returned they built a house in Lytle where they lived until his death in 1994. In 2003 she moved to St. Leonard Retirement Community in Centerville. Jessie and Guy had 2 children, but along with several other mothers in the community, she helped raise all of the children of Lytle at the time. After raising these children she went back to work, this time at Elder Beerman Department Store, from which she ultimately retired. She was a member of the Lytle United Methodist Church from the time she moved to Lytle until her death, and was active in Girl Scouts, Boy Scouts, school and church activities for as long as she was able. Funeral services will be 11 AM Wed. April 30 at Stubbs-Conner Funeral Home, Waynesville, following visitation by friends from 10-11 AM. Rev. Brian Blankenship and Rev. Dennis Bunnell will be presiding. Burial will be at Springboro Cemetery. If desired, contributions may be made to the Lytle United Methodist Church, 8464 Lytle Ferry Rd., Waynesville, OH 45068. Condolences at www.stubbsconner.com.

BURROUGHS, Jessie Blanch Orahood, age 94, of Waynesville and more recently residing at St. Leonard&#8217;s Retirement Community in Centerville, passed on April 27, 2014, with her family by her side. Jessie was born on April 10, 1920, in Urbana,... View Obituary & Service Information

The family of Jessie B. Burroughs created this Life Tributes page to make it easy to share your memories.

Send flowers to the Burroughs family.