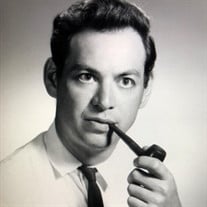 John Fischer was born in 1930 in Hungary to parents József Fischer and Eszter Pécsi. He and his brother Gyuri spent a happy childhood in Budapest. John graduated from the Evangelikus Gymnasium in 1948. He and his family actively assisted Jews in Budapest during the Nazi occupation. After World War II ended, John decided to emigrate to the United States. Upon his arrival to this country in September 1948, John spent one year at the Institute of Design in Chicago, a continuation of the famous German Bauhaus. He then enrolled in the Pratt Institute in Brooklyn, and graduated with a Bachelor of Architecture degree in 1954. From 1955-56, he worked for the architectural firm of Skidmore, Owings and Merrill, then opted to leave NYC. He was associated with the Merchant, Seidel and Hickey Architectural firm in New Brunswick from 1956 until 1961, when he opened his own architectural office on Patterson Street with a focus on both residential and commercial properties. John met Jennie Lee Braddock in New York City in 1953. They were married the next year and raised five children, Paul, Laura Lee, Barbara, Marika, and Lawrence, in Highland Park, New Jersey. During this time, John was active in the civil rights movement in New York City and New Jersey. He and Jennie Lee were among the founding members of the New Brunswick Quaker Meeting. He was also active in the Homebuilders Association.   John retired from architecture in 1975, but had started working as a developer in 1972 and continued in this occupation until 1978. He built Birchwood Terrace Apartments in New Brunswick, NJ, and his indispensable manager, Cindy Serge, became his trusted business partner.   John took a strong interest in his extended family, both his wife’s family in Ohio, and his family that remained in Budapest.   John had many interests that he pursued with passion, including music, tennis, sailing, skiing, and travel. He played violin, attended opera, and knew most of Beethoven’s works by heart. For many years, he played tennis every day. And he and Jennie traveled all over the world, from Alaska to Antarctica, and with yearly trips to the Virgin Islands and Paris.   In 2019, John and Jennie moved to Capitol Lakes retirement community in Madison, Wisconsin, where two of their daughters lived, and where they had weekly family dinners until the pandemic hit. John suffered a number of strokes, and his health declined. A series of underlying conditions, made more challenging by the addition of covid, proved too much. He died on December 5, 2020 at the age of 90. He is survived by his wife Jennie Lee, his children and their spouses, 8 grandchildren, and many other beloved family members.  Graveside services will be held 11 AM Wednesday, December 9 at the Friends Cemetery in Waynesville, Ohio. Stubbs-Conner Funeral Home in Waynesville is serving the family. Condolences at www.stubbsconner.com.

John Fischer was born in 1930 in Hungary to parents József Fischer and Eszter Pécsi. He and his brother Gyuri spent a happy childhood in Budapest. John graduated from the Evangelikus Gymnasium in 1948. He and his family actively assisted Jews... View Obituary & Service Information

The family of John Fischer created this Life Tributes page to make it easy to share your memories.

Send flowers to the Fischer family.