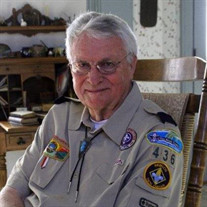 McMinn, John A., age 85, of Lebanon, passed away Saturday January 12, 2019 at his residence in Otterbein Lebanon. John was born in Lima and raised in Columbus, Ohio. He received a Bachelor Degree with majors in Marketing, Finance, and Naval Science from Miami University where he was an active member of the Sigma Alpha Epsilon Fraternity. He served in the United States Navy from 1955-58 aboard the USS Calcaterra DER-390 as an Operations Officer. He continued to serve in the Naval Reserves and completed his career as Lieutenant Commander. His career in business began with Cincinnati Cordage & Paper Company in 1958 as a salesman and he retired as Vice President in 1997. John was an active member of the Lebanon Presbyterian Church. As an Eagle Scout and Silver Beaver, he was involved in leadership with the Boy Scouts of America. He was Den Leader with Pack 436 and Assistant Scoutmaster of Troop 186, both in Lebanon, and a member of the Order of the Arrow. In addition, he had served as Regional Director of Ducks Unlimited, Former President and Board Member of the Local Area Progress Council and sat on the board of the Ohio Small Business Council, the Ohio Chamber of Commerce, the Taxation Committee, Project Excellence Board, and the Lebanon Parks Commission. Also, he served as a mentor for the Mary Haven facility in Lebanon, was recognized by Ohio First Families, and facilitated restoration work for Dick's Creek Cemetery in Franklin Township. Selfless, generous, compassionate, and family oriented, John lived his life based on the Boy Scout oath. John was best known for his moral integrity, leadership, problem solving skills and strong Christian faith. Among many things, he will be remembered for the ability to strike up a conversation and make a friend with anyone without expecting anything in return. John greatly enjoyed hiking, camping, sailing, canoeing, fishing, gardening, hunting, reading, history, and genealogy. He collected historical artifacts and appreciated items of historical significance as demonstrated through his support of the Warren County Historical Society. He lived 37 years on his beloved Lochmoor Farm in Lebanon and was a certified tree farmer. With the passion of his late daughter, Mindy, and her love of horses, Lochmoor Stables was born in 1991. He loved his home and was proud of its historical significance. With his love of sailing, he served as the Commodore of the Leatherlips Yacht Club in Columbus. He will also be remembered for the affection he had in regard to his Scottish heritage. He was associated with the Menzies Clan in Weem Scotland and visited Scotland twice to explore his heritage further. John was preceded in death by his first wife, Cherie, and more recently by his wife, Patricia; son, Scott Anderson McMinn; daughter, Melinda “Mindy” McMinn-Darst; and his parents, William Cary McMinn and Eleanor Lucille Leech-McMinn. He is survived by three grandchildren, John Darst, Maddy Darst, and Justin Davidson; son-in-law, Greg Darst; sister, Janet (Richard) Nicholson; nieces, Heather and Hannah Nicholson, Marti Beth Frye, Leigh Anne Kraft and Bill Staler; Justin’s parents, Samuel Davidson and Julie Anstaett; Bryan, Dwight and Brent Anstaett; close friends, Susie (Tim) Klenk and their three sons Michael, Andrew, and David; friend, Winkie Foster, and countless others. A memorial service will be officiated by Reverend Peter Larson at 5:30 pm, Friday, February 1, 2019 at the Lebanon Presbyterian Church followed by dinner. The family will receive friends one hour prior to the service Friday at the church. In lieu of flowers, contributions may be made to Boy Scout Troop 186 of Lebanon, 123 N. East St., Lebanon, OH 45036. Stubbs-Conner Funeral Home in Waynesville is serving the family. Condolences at www.stubbsconner.com.

McMinn, John A., age 85, of Lebanon, passed away Saturday January 12, 2019 at his residence in Otterbein Lebanon. John was born in Lima and raised in Columbus, Ohio. He received a Bachelor Degree with majors in Marketing, Finance, and Naval... View Obituary & Service Information

The family of John A. McMinn created this Life Tributes page to make it easy to share your memories.

McMinn, John A., age 85, of Lebanon, passed away Saturday January...

Send flowers to the McMinn family.