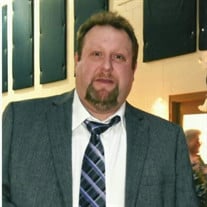 MILLER, John F., age 48, of Franklin and formerly of Waynesville, passed away Tuesday, August 17, 2021, at the Middletown Atrium Hospital. John graduated from Waynesville High School, class of ’91. He went on to receive a Bachelor’s Degree in Electronic Engineering from Rio Grande University. He was currently employed at L3Harris, a space and electronics company in Mason. He had been employed for nearly 12 years with L3Harris, and was proud of his work with the recent Mars probe mission in space. Humble, somewhat quiet until you got to know him, and always willing to lend a helping hand, John enjoyed expressing ideas in interesting conversations with others. During his high school years, he participated and excelled in track, specifically in shot put. He greatly enjoyed computer gaming and anime, container gardening, and genealogy research. John especially enjoyed grilling out at home with an oversized grill, whereby he always looked forward to his big 4th of July holiday party that he hosted for friends and family. Known as "Good Tanker" online, his gaming skills were considered highly advanced by experienced gamers worldwide. His collectibles included old movies, computer games, anime memorabilia, and other items of interest. Among many things, he will be remembered for how devoted he was to the care of his parents, which ultimately he gave his life to. His relationship with his dad was more of a friendship, complete with bargaining hunting, coupon clipping, and attending auctions and flea markets for deals. He was preceded in death by his parents Homer and Jacqulin Miller and one brother Carl Miller. He is survived by his two brothers Greg (Christy) and Jeff (Lois) Miller; two nieces Megan Miller and LeAnna Mann; one nephew Daniel Miller; two great nieces Alanna Houston and Elizabeth Jacqulin Mann; and one great nephew Issac Mann. A combined funeral service for John and his father, Homer, will be held 11 AM Monday, August 23 at Stubbs-Conner Funeral Home in Waynesville. Tom Chattin will be officiating the service. Burial will be in Miami Cemetery, Corwin. The family will receive friends 5 – 8 PM Sunday, August 22 at the funeral home. For those unable to attend the services in person, you may watch the live stream of the service by clicking on the following link: https://view.oneroomstreaming.com/authorise.php?k=1629374601671605. Condolences at www.stubbsconner.com.

MILLER, John F., age 48, of Franklin and formerly of Waynesville, passed away Tuesday, August 17, 2021, at the Middletown Atrium Hospital. John graduated from Waynesville High School, class of &#8217;91. He went on to receive a Bachelor&#8217;s... View Obituary & Service Information

The family of John Franklin Miller created this Life Tributes page to make it easy to share your memories.

MILLER, John F., age 48, of Franklin and formerly of Waynesville,...