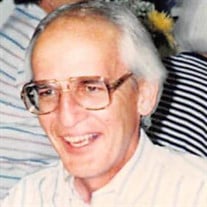 MYERS, Joseph Dunnie, age 74, of Dayton, passed away Monday, December 27, 2021, at his residence. Joseph was born December 24, 1947, to Earl and Ruby Myers in Pennington Gap, Virginia. Joseph graduated from Miamisburg High School, class of ’65. He later graduated from Miami –Jacobs Career College with an Associate’s Degree. In addition, he earned a Bachelor’s Degree in Business and Law Management from Urbana University in 1981. He was baptized under Southern Baptist. He served in the United States Army during the Vietnam War and was awarded the Combat Infantry Award during his time of service. He retired from Wright-Patterson Air Force Base in 2010, as a civilian subcontractor after 30 years of service. Even though he was a quiet man, he was very outgoing and belonged to numerous organizations. He was a lifetime member of the Miamisburg Moose # 1645 and the West Carrolton VFW # 3438, member of the American Legion Post # 165, Combat Infantry Men’s Association, and Miamisburg Mason Minerva Lodge # 98. He enjoyed playing golf as long as he was physically able to get out on the course and try to score a hole in one. He loved to travel, especially if it involved being able to relax. Some of his favorite places to visit were Hawaii, Florida, Las Vegas, and a houseboat on Cumberland Lake. While in Las Vegas and Indiana, the Casinos always enticed him for a good game of roulette and Black Jack. Among many things, he will be remembered for his positive outlook even during the hardest of times, and through everything, he always enjoyed laughing and being upbeat. He was preceded in death by his parents Earl and Ruby Myers. He is survived by his wife of almost 48 years, Mary; one brother Timothy (Patricia) Myers; two nephews Jason (Traci) Myers and Joe Myers; sister-in-law Alice Adkins-Deatherage; brother-in-law Loyd (Debbie) Crump; and many nieces, nephews, and extended family. A celebration of life gathering will be 7 PM Saturday, January 8 at the West Carrolton VFW, with color guard provided by the VFW. Stubbs-Conner Funeral Home is serving the family. If desired, contributions may be made to Ohio’s Hospice of Dayton, 324 Wilmington Avenue, Dayton, Ohio 45420 and/or CurePSP (a foundation for progressive supranuclear palsy) 1216 Broadway, 2nd Floor, New York, NY 10001. Condolences at www.stubbsconner.com.

The family of Joseph Dunnie Myers created this Life Tributes page to make it easy to share your memories.

Send flowers to the Myers family.