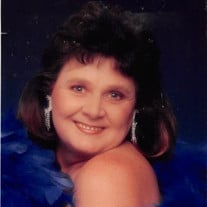 WOOD, Juanita F. “Debby”, age 67, of Middletown and formerly of Waynesville, passed away Monday, August 16 at the Bridge Hospice Care Center in Findlay Debby was very caring, helpful, outgoing, funny, strong, and independent. She recently retired after 14 years at the Drury Inn. She also previously works for Lebanon County Manor along with Hawthorn Glen in Monroe for many years. Her primary passion was spending quality time with her children, grandchildren, and great-grandchildren. Family was very important to her! A few memorable moments were watching the birth of three grandchildren (Josh, Amber, and Logan) along with one great-grandchild (Kyndalyn). Debby loved Elvis so much that she collected a great deal of his memorabilia over the years. When her kids were younger, Jerry and Debby took the kids on many trips to Gatlinburg, and to visit the Elvis Homestead in Memphis. It became a family tradition. Amongst many times in her life, she will be remembered for one eventful time when they decided to pull the car over to take a nap, subsequently waking to black bears surrounding their car. Another one of her favorite past times in life was playing bingo and going to the casinos. She was preceded in death by her husband, Jerry, in 1993; her parents Jack and Juanita Lillie; one brother Don Lillie; and three sisters Diana Guthrie, Linda Wright, and “Little” Linda Lillie. She is survived by four children Kelly (Khron) Powell, Lisa Wood, Jerry Wood (fianceé Jennifer Wiley), and Ashley (Richard) Curtiss; 10 grandchildren; 24 great-grandchildren; and one brother Jack (Debbie) Lillie. Funeral services will be 2 PM Monday, August 30 at Stubbs-Conner Funeral Home in Waynesville. Burial will be in Miami Cemetery, Corwin. Celebrant Dr. Dan Flory will be officiating. The family will receive friends 12 PM - 2 PM Monday at the funeral home. In lieu of flowers, the family wishes for donations and contributions to go toward the funeral expenses directly at Stubbs-Conner Funeral Home. Condolences at www.stubbsconner.com

The family of Juanita "Debby" F. Wood created this Life Tributes page to make it easy to share your memories.

Send flowers to the Wood family.