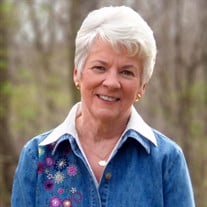 RUSSELL, Judith Ann, age 81, of Oregonia, passed away Monday, March 22, 2021 at her home surrounded by her loved ones. Judy graduated from Fairview High School, in Cleveland, Ohio, with the class of ‘57. Following high school, she attended Ohio University where she was a member of Alpha Xi Delta Sorority, was tapped for Mortar Board and earned an Associates of Arts degree in 1959. After graduating and an additional year of study at Ohio University, she was employed at American Greetings in Cleveland as a commercial artist until she married and started a family with her husband, Terry. Judy and Terry met at Ohio University and, following Terry’s military service and civilian employment at NASA in Cleveland, they settled in Forest Park, Ohio, in 1968, where they were residents for almost 26 years. Although she had the opportunity to return to school and the full-time professional business world, Judy chose to dedicate her life to her family and volunteer work. She was active on the Forest Park Beautification Committee, which among several projects of which Judy was a part, enabled the city to earn the title of Tree City USA from the Arbor Day Foundation. She served as a local fundraising chairperson for the American Heart Association for many years, and when her children were young, wore the hats of room mother, scout leader, and soccer coach. As her kids got older, she also enjoyed owning her own residential and commercial wallpapering business for several years, where she worked in partnership with a friend and her sister. A member of the Greenhills Community Church – Presbyterian for many years, Judy served as a deacon and Sunday school teacher and made lifelong, treasured friendships that last to this day. She enjoyed cooking and sewing, and was a consummate problem solver. Driven by a strong German Protestant work ethic, Judy readily volunteered to assist with church projects from the youth group’s annual plant sale to potluck dinners, and utilized her artistic talents to create and sew banners for religious holidays and assist with the remodeling of the church sanctuary, including the design of a new stained glass window for the altar. In later years, Judy volunteered with Matthew 25 Ministries and was a member of the Progressive Women’s Club in Waynesville, where she served for more than 24 years as a key member of the planning committee for the spring auction that raises funds for college scholarships and other endeavors. In 1994, Judy and Terry moved to Oregonia, where they built their dream home along the Little Miami River, based upon a design that Judy had been working on in her head for many years. She had an amazing eye as a space planner and could seemingly visualize things in 3-D. She often talked about how she had mentally lived in every space inside the home long before it was ever built, and she and her family are grateful that it was in her home where they were able to say goodbye. Also as a longtime resident of Bass Haven Marina in Marblehead, Ohio, Judy enjoyed great friendships with fellow “weekend warriors”, was a member of the Power Squadron, and as Terry would humbly admit, was often a better fisherman than he. Judy fiercely loved her family, each and every one of them. She was an incredible wife, mother, sister, and friend, and as she bravely faced her battle with cancer, also earned the title of “Mama Bada**”. Terry attributes their strong and successful marriage to largely allowing Judy to guide them through life and admits that she rarely steered them wrong. Judy was preceded in death by her parents John and Lucile Falkenstein, brother-in-law David Kelch, granddaughter Miriam, and a sweet but ornery female miniature schnauzer named Fred. In addition to her loving husband of almost 60 years, Judy is survived by her two sons David Scott (Babette) Russell and Timothy John (Elizabeth) Russell; one daughter Tracy Ellen Russell (fiancé Scott Weinert); eight grandchildren Justin (Tiffany) Chandler, Andrew Russell, Alexandra Russell, Sydney Russell, Emma Russell, Victoria Russell, Abigail Russell, and Savannah Russell; two great grandchildren Isaac and Isabella Chandler; and her beloved sister Joann Kelch. A memorial service and celebration of Judy’s life will be held on Saturday, April 10 at 3:00 pm at the family residence in Oregonia and will be officiated by Rev. Judith Little. Please bring a mask to wear and dress comfortably as the service will be held in a tent outside. Those desiring to attend are encouraged to arrive at 2:30 PM as the memorial service will begin promptly at 3 PM. Stubbs-Conner Funeral Home in Waynesville is serving the family. In lieu of flowers, contributions may be made to Matthew 25 Ministries, Hospice of Cincinnati, and the American Cancer Society.

RUSSELL, Judith Ann, age 81, of Oregonia, passed away Monday, March 22, 2021 at her home surrounded by her loved ones. Judy graduated from Fairview High School, in Cleveland, Ohio, with the class of &#8216;57. Following high school, she... View Obituary & Service Information

The family of Judith Ann Russell created this Life Tributes page to make it easy to share your memories.

Send flowers to the Russell family.