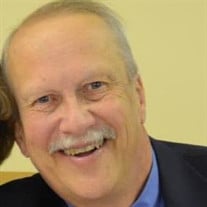 STAGGE, Keith A., age 60, of Waynesville, passed away Thursday, October 10, 2019 at Hospice of Butler & Warren Counties. Keith graduated from Clinton Massie High School in 1977, received a bachelor’s degree in philosophy and religion from Wilmington College, and a master’s degree in Apologetics from the Cincinnati Theological Seminary. Over the course of 25 years, he served as pastor in many different churches, and also started Lebanon Assembly of God in 1991. Between 1995 - 2001, he was the administrator at Ridgeville Christian School. Over the last six years, he has served as a chaplain for the Kettering Health Network. He attended Fellowship of Praise Church in Clarksville. His life was a testimony of God's faithfulness. His legacy is one of great faith, curiosity, love for God and his family. Keith was a man full of grace. He greatly enjoyed/hated golfing, fishing at his friend Steve’s place, along with camping with family and friends, and hunting at his friend Jim’s property. Some of his favorite family memories were made on the many trips to Gatlinburg when his children were young, and in more recent times to Orlando with his grandchildren. Among the many things, he will also be remembered for his love of music and singing, and also his gift of playing the piano. He was preceded in death by his parents Walter and Janet Stagge and sister Mindy Stagge. He is survived by his wife of 37 years, Sandy; four children Kendra (Zechariah) McKamey, Rachel (Joshua) Frueauf, Benjamin (Cassandra) Stagge; and Malea Stagge; 11 grandchildren Gabe, Abigail, Luke, Brookelyn, Kaiden, Maggie, Tanner, Jordan, Asher, Tenley, and Kenna; two brothers Roger (Roberta) Stagge and Duane (Cindy) Stagge; two sisters Linda (Richard) Tafel and LuAnn (Rocky) Holmes; and many other loving family members including mother-in-law Ruby J. Ross and brothers and sisters-in-law Doug and Joyce Ward, Billy and Paula Ross, and Raymond and Debbie Umstead; and many nieces and nephews. Funeral services 2 PM Tuesday, October 15 at Newspring Church in Springboro. Matt Morgan and Gary Dickinson will be officiating the service. Burial will be in Miami Cemetery, Corwin. The family will receive friends 4-8 PM Monday at Stubbs-Conner Funeral Home in Waynesville. In lieu of flowers, contributions may be made in Keith’s memory to the college fund of his daughter, Malea, c/o Malea Stagge College Fund, at any LCNB National Bank location. Condolences at www.stubbsconner.com.

The family of Keith A. Stagge created this Life Tributes page to make it easy to share your memories.

Send flowers to the Stagge family.