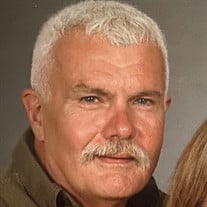 BLAIR, Kelly E., age 66, of Waynesville, passed away Saturday, January 16, 2021 at Quaker Heights in Waynesville, after a lengthy battle with ALS. Kelly’s life was dedicated to public safety with service to his country and community. Kelly honorably served in the US Coast Guard and was stationed at Coast Guard Training Center, Cape May, New Jersey. His law enforcement career began with the Dayton Police Department. He subsequently worked at Sugarcreek Township Police Department where he advanced to the position of Chief of Police. He officially retired from the Warren County Sheriff’s Office in 2017 after more than 37 years of combined service. Kelly embodied the values of a peace officer to the core. Honor. Duty. Courage. He was a member of the Waynesville American Legion Post 615. Supportive, loyal and patriotic, Kelly highly believed in integrity, respect, and the characteristics of right and wrong. His patriotism and loyalty were evident when you talked to him. Kelly valued his friends and family and greatly treasured time spent with them. He enjoyed the outdoors and hunting, camping, fishing, and boating. He also enjoyed watching movies, playing games and a good barbecue. He enjoyed riding his Harley Davidson motorcycle with his wife and friends and discovering sights on the roads less travelled. He loved traveling and visiting new places, and especially enjoyed the beach and the mountains, traveling multiple times to Daytona Beach, Myrtle Beach and Gatlinburg. He also enjoyed many trips to Lake Cumberland. Among many things, Kelly will be remembered for his love of the Christmas season, where he focused on family and time together. He will also be remembered for his love of animals, including the many dogs he had throughout the years, loving each and every one as part of the family. He was preceded in death by his parents William and Nancy Blair and his father-in-law Jack Lyons. He is survived by his wife of 31 years, Sue; two daughters Ashley (Matt) Helton and Jessica Blair; his son Jack Blair; grandchildren Micah, Hannah, and Lincoln; his sister Wilma Peace; and mother-in-law Elaine Lyons (Merrill Durig). The family will receive friends 11 AM - 1 PM Friday, January 29 at Stubbs-Conner Funeral Home in Waynesville. A celebration of life service will immediately follow the visitation at 1 PM on Friday at the funeral home. The services will be streamed live via the internet. If you wish to view the services on the Webstream, please click the link accessible from tribute wall tab of Kelly's page on www.stubbsconner.com. A procession and memorial graveside will follow at David Cemetery in Kettering. Celebrant Brian Bennett will be officiating the services. If desired, contributions may be made to the Warren County Deputy Sheriff’s Benevolent Association, 822 Memorial Drive, Lebanon, OH 45036. Condolences at www.stubbsconner.com.

BLAIR, Kelly E., age 66, of Waynesville, passed away Saturday, January 16, 2021 at Quaker Heights in Waynesville, after a lengthy battle with ALS. Kelly&#8217;s life was dedicated to public safety with service to his country and community.... View Obituary & Service Information

The family of Kelly E. Blair created this Life Tributes page to make it easy to share your memories.

Send flowers to the Blair family.