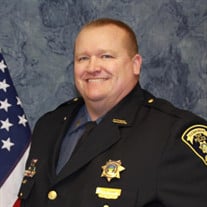 CORNETT, Larry Bryan, age 43, of Clarksville and formerly of Waynesville, passed away unexpectedly Saturday, June 2, 2018, at his residence. Larry graduated from Waynesville High School in 1993 and attended Otterbein University, and he played football throughout his time at both schools. He was currently employed as the Investigative Sergeant with the Clearcreek Township Police Department. He was also serving as the union president for the sergeants under the Ohio Patrolmen’s Benevolent Association (OPBA) and was a member of the Warren County FOP Lodge 103. Larry was a Past Master of Waynesville Masonic Lodge #163, Past District Deputy Grand Master for the 2nd Masonic District, Worthy Patron of Miami Chapter #107 O.E.S, and Orator of the Dayton Chapter of Rose Croix. Larry was very involved with multiple events for the benefit of various charitable causes, most notably Special Olympics Ohio. He was one of the original organizers of the Caesar Creek Polar Plunge, held each year in the frigid Caesar Creek Lake water during late winter with proceeds benefitting Special Olympics Ohio. He was also the co-leg leader for Southwest Ohio for the Law Enforcement Torch Run. He also worked to raise money for Special Olympics Ohio through Tip A Cop and Cop on a Rooftop events. In addition, he was a board member for the Warren County Children’s Advocacy Center. A true family man, he loved his wife, and his face lit up whenever he saw his two young sons. He was proud of his Masonic work, and he greatly enjoyed traveling throughout the area meeting fellow Masons. He also enjoyed being outdoors, supporting the National Night Out event, and winning the bet with his sister each year when the Buckeyes beat Michigan. He took his job protecting the public very seriously, and he often fought to defend those who could not defend themselves: children. Happy and outgoing, he was a friend to all who met him and was always willing to help others. He truly was a great man, and he is missed so much. He is survived by his wife, Rachel (Howell) Cornett; two sons Bryan Christopher and Oscar Henry Cornett; his parents Larry M. and Theresa Cornett; and his sister, Tonya Cornett. The family will receive friends 3-8 PM Thursday, June 7, at Crossview Christian Church, 4237 E. Social Row Rd., Waynesville, OH. Masonic and Scottish Rite Ring services will be held immediately following the visitation Thursday at the church. Funeral services will be held 10 am Friday, June 8 at Crossview Christian Church. Harless Maynard will be officiating the service. Burial will be in Miami Cemetery, Corwin. If desired, contributions may be made toward the college fund of Larry’s kids by making a donation to the Larry B. Cornett Charitable Fund at any Wright Patt Credit Union branch. Stubbs-Conner Funeral Home in Waynesville is serving the family. Condolences at www.stubbsconner.com.

CORNETT, Larry Bryan, age 43, of Clarksville and formerly of Waynesville, passed away unexpectedly Saturday, June 2, 2018, at his residence. Larry graduated from Waynesville High School in 1993 and attended Otterbein University, and he played... View Obituary & Service Information

The family of Larry Bryan Cornett created this Life Tributes page to make it easy to share your memories.

CORNETT, Larry Bryan, age 43, of Clarksville and formerly of...

Send flowers to the Cornett family.