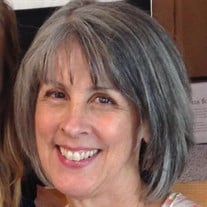 FOLEY, Leanne H. age 64, of Centerville and formerly of Waynesville, passed away Thurs. March 1, 2018. She was born Dec. 3, 1953 to Frank A. and Donna Jean Heinselman in Youngstown, Ohio. Leanne graduated from Niles McKinley High School in 1972. She earned a bachelor’s degree from Miami University in 1976 and two master’s degrees from Wright State University. She started her teaching career at Little Miami Junior High in 1976 and became an art therapist in 1987. She returned to teaching at Waynesville High School in 2002 and retired in 2014 as a National Board Certified Teacher and the high school’s art teacher. Leanne traveled extensively throughout her life. In high school, she was an exchange student in South Africa. During college, she spent one quarter as an exchange student in Luxembourg. Beautiful, strong, selfless, kind, and faithful, Leanne loved life and lived it to the fullest. Running, painting, teaching, and people were her passions. In 2012, she took up running and completed numerous half marathons and full marathons, including the Nationwide Children’s Hospital Columbus Marathon in 2014 and the New York City Marathon in 2015. She loved her family and friends more than anything and will be remembered for her encouraging personality. She was preceded in death by her parents and one brother Eric Heinselman. She is survived by her husband of 37 years, Michael E. Foley; her daughter Megan G. (Bryan A.) Schwartzwalder; step-grandson Landon Schwartzwalder; three brothers David (Patricia) Cregg (Heather), and Ken (Michele) Heinselman; sister-in-law Mercedes Heinselman; aunt Carole Lohse; numerous nieces and nephews; and her beloved Cavalier King Charles Spaniel dog, Chloe. Mass of Christian Burial will be held 10:30 AM Sat. March 10 at St. Mary of the Assumption Catholic Parish, 9579 Yankee Rd., Springboro, Ohio. Immediately following the Mass, everyone is encouraged to join the family in a luncheon provided by the church. Stubbs-Conner Funeral Home in Waynesville is serving the family. In Leanne’s memory, contributions may be made to Multiple Myeloma Research Foundation, 383 Main Ave., 5th Floor, Norwalk, CT 06851 or the Waynesville High School Art Department, c/o Ron James Treasurer, 659 Dayton Rd., Waynesville, OH 45068. Condolences at www.stubbsconner.com.

FOLEY, Leanne H. age 64, of Centerville and formerly of Waynesville, passed away Thurs. March 1, 2018. She was born Dec. 3, 1953 to Frank A. and Donna Jean Heinselman in Youngstown, Ohio. Leanne graduated from Niles McKinley High School in... View Obituary & Service Information

The family of Leanne H. Foley created this Life Tributes page to make it easy to share your memories.

FOLEY, Leanne H. age 64, of Centerville and formerly of Waynesville,...

Send flowers to the Foley family.