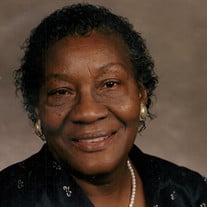 Lena Z. Williams was born on August 5, 1924, the fourth of eight children born to the union of the late Leonard and Stella Lawson. She was born and raised in Longview, Texas, where she attended Sabine Valley Elementary School and graduated from Shiloh High School. She continued her education at Prairie View College. Lena met Johnnie Williams, a Merchant Marine, in Houston, Texas. They were married in 1947 and moved to Dayton, Ohio where they settled and began a family. As the family grew, they moved to Harveysburg , Ohio, and proudly raised six children. She loved and treasured her family. She was supportive of her children’s education and activities and a devoted wife until her husband’s passing in 1981. In addition to family, Lena’s other interests and passions included gardening (she enjoyed sharing and exchanging her fruits and vegetables with the neighbors) and rummaging through thrift stores and yard sales. She was a faithful member of St. Augustine Catholic Church in Waynesville, Ohio, and especially enjoyed leading the rosary and participating in the preparation and sale of cabbage rolls at the annual Sauerkraut Festival. Other organizations in which she was involved included the Homemakers’ Club and the Harveysburg Historical Society. She resided in Harveysburg for more than 50 years until health concerns required her to move and live with her daughters. Left to cherish Lena Williams’ memory are her son, Edwin Williams (Arlinda) of Stone Mountain, Georgia; daughters, Marietta Countee of Stone Mountain, Georgia; Elizabeth Allen (Howard) of Dayton, Ohio; Teresa Gipson (Arthur) of Hanford, California; and Catherine Williams of Pasadena, California; nine grandchildren, John Boddie, Carmen Williams, Georgette Thinn (Marquett), Lena Gipson, Tyrone Williams, Julia Gipson, Angelica Williams, Arthur Gipson Jr., and Anthony Brandy ; one great-granddaughter, Asia Williams; one sister and two brothers all of California, Lenora Vincent, Lee Andrew Lawson, and Leonard Lawson Jr. (Dorothy). She also leaves behind a host of nieces, nephews, other relatives and friends. She was also preceded in death by her son, Johnnie J. Williams, three sisters, Catherine Lawson, Elizabeth Lee, Anita Lawson, and a brother, Lorenzo Lawson.

Lena Z. Williams was born on August 5, 1924, the fourth of eight children born to the union of the late Leonard and Stella Lawson. She was born and raised in Longview, Texas, where she attended Sabine Valley Elementary School and graduated... View Obituary & Service Information

The family of Lena Williams created this Life Tributes page to make it easy to share your memories.

Send flowers to the Williams family.