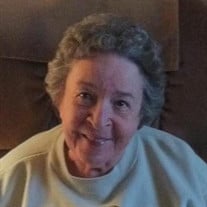 FRANCISCO, Lois Jane “Janie”, age 85, of Waynesville, died Friday, March 13, 2020 following a long illness. Janie was born April 23, 1934, in Louisa, KY, the daughter of Lonnie C. and Zelma (Davis) Skaggs. She graduated from Blaine High School in 1950 and received her Bachelor Degree from Morehead State College in 1955. Janie then moved to Waynesville and began teaching at the Waynesville Elementary School from 1956 until her retirement in 1992, where she spent most of her years as part of the “Fabulous Fifth”. She was a member of the Waynesville United Methodist Church. Janie enjoyed collecting cookbooks, entertaining, antiques, and puzzles. She is survived by her daughter, Terri (Karen Geiger) of Kettering; son, Tim (Christina) of Kent; grandchildren, Jacob and Emily Francisco, Natalie (Larry) Dawkins and Miranda McCain; two nephews; and two nieces. Janie was preceded in death by her husband of 41 years, Craig; sister, Kay Wolfe; and brother-in-law, Robert Wolfe. Graveside services will be held Noon Tuesday, March 17 at Miami Cemetery, Corwin. Burial will be in Miami Cemetery, Corwin. The family will receive friends 10:30 - 11:30 AM Tuesday, March 17 at Stubbs-Conner Funeral in Waynesville. In lieu of flowers, memorial contributions may be made to the Waynesville United Methodist Church or the Wayne Township Volunteer Fire Department. Special thanks to Hospice of Dayton for their loving care. Condolences at www.stubbsconner.com.

The family of Lois Jane "Janie" Francisco created this Life Tributes page to make it easy to share your memories.

Send flowers to the Francisco family.