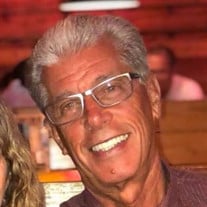 SCHEAR, Lonnie D., age 70, lifelong resident of Waynesville and affectionately described as “Mr. Waynesville,” passed away unexpectedly Saturday, January 18, 2020.   Lonnie graduated from Waynesville High School, class of ’67. He was a member of the first ever WHS Football team while also receiving many honors for his participation in the HS Choir and HS Musicals.  He served in the United States Marine Corp during the Vietnam era, resulting in a lifetime of patriotism. If asked if he WAS a Marine he would quickly respond, “I AM a Marine, once a Marine, ALWAYS a Marine.”   Lonnie was currently employed as a Vice President of LCNB National Bank.  His career began in 1972 at what was then known as the Waynesville National Bank.  He worked for 47 years at the hometown bank in Waynesville, rarely missing a day except for his “fun in the sun” vacations; ultimately passing away just days before his retirement.   Community minded, Lonnie devoted much of his time and effort to many civic organizations. He served on the Wayne Township Fire Department for over 30 years. Lonnie was a long time member of the Waynesville Area Chamber of Commerce; serving as President for two years early on and treasurer for the last fifteen years. Lonnie put his heart and soul into the well-known Ohio Sauerkraut Festival, as he knew the importance of this festival to the entire community. He served as Chairperson in 1988 as well as 2016-2019, and he worked tirelessly behind the scenes all other years. Lonnie, along with other family and community members, made sure the traditional Waynesville Country Fair was up and running for our community’s kids and families each summer for over 10 years. He was a long time Veteran member of the American Legion Post 615.  As a result of his service to his community, he was awarded Waynesville Area Chamber of Commerce, Business Person of the Year in 1999. Then in 2016 Lonnie received the well deserved Waynesville Lion’s Club, Citizen of the Year Award.  Along with his unwavering community support, Lonnie was a huge advocate of all aspects of Wayne Local Schools.  He coached little league baseball and youth basketball when his kids were young. He spoke at Career Day, giving speeches to our students on the importance of community service at all ages, donated time to help teach high school business classes, and chaperoned several school sponsored trips to Camp Joy.  If you knew Lonnie, you knew that he was perhaps the Spartans’ biggest fan. Lonnie always showed up to games, usually in Spartan apparel. He never sat in the stands but instead chose to stand watch from his corner spot in the gym or at the field.  Outgoing, loyal, and very routine in his daily life, Lonnie was strict but fair.  Demonstrating his support, he never missed his own kids’ games or those of his grandkids. While he could be strong-willed, he was a softie with his grandchildren.  In addition to his beloved Spartans, he was also a fan of the Lakers and Duke Basketball. He greatly enjoyed poker with his friends, his Sunday jogs, and working on Sudoku and other puzzles in his spare time.  In the neighborhood, he will be remembered for the meticulous care of his yard, rotating the mowing angles and keeping it trimmed perfectly. Lonnie loved the summer months and the heat that came with it. He looked forward to their two weeks in Daytona Beach, Florida. The family originally stayed at lifelong friend Marty Mayo’s hotel, eventually moving south to other condos, but Lonnie always wanted to be right on the beach. He was preceded in death by his parents Eugene Tufts and Martha Schear, and one sister Regina “Sissy” Hall.  He is survived by his wife of 47 years, Connie; daughter Nikki (David) Deters; son LD (Megan) Schear; four grandchildren Lucas, Josianne, Logan, and Miller; two brothers Terry (Margaret) Schear and Bobby (Debbie) Johnson; sister Betty Wade; and several nieces, nephews, great nieces and nephews, and extended family members. A celebration of life service will be held at 6 PM Sunday, February 9 at the Waynesville High School Gymnasium.  The family will receive friends from 1 PM - 6 PM Sunday at the Waynesville High School Gym. Stubbs-Conner Funeral Home in Waynesville is serving the family.  In lieu of flowers, contributions may be made to the Waynesville Alumni Association, P. O. Box 1042, Waynesville, OH 45068 and/or the Wayne Township Fire Department, Inc., P. O. Box 264, Waynesville, OH 45068. Condolences at www.stubbsconner.com.

The family of Lonnie D. Schear created this Life Tributes page to make it easy to share your memories.

Send flowers to the Schear family.