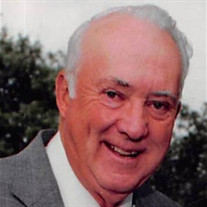 Fox, Lyle Scott, age 93, a longtime resident of Warren County, died March 12, 2018 at his residence at Brookdale Beavercreek, where he had lived since October. Born June 9, 1924, in rural Warren County to Frank and Grace Fox, Lyle was the youngest of eight children. After graduating from Waynesville High School in 1942, he served in the US Army in Europe during World War II and was part of the occupation force in Japan after the war. During the Korean War, he was recalled to active duty in the US Air Force as an instructor at Wright-Patterson Air Force Base. He married his high-school sweetheart Ellen Moss in 1946; they were happily married until Ellen’s death in 2008. He received a BS in Education from Ohio State University in 1949 and a Master’s in Education from Miami University in 1963. He spent 25 years working in education, 5 years in the classroom and 20 years in counseling and administration, mostly in the West Carrollton school system. After his retirement in 1981, he was active in the Waynesville Lions club and enjoyed traveling throughout the world with Ellen. He was a passionate lifelong supporter of Ohio State football. He was preceded in death by his wife of 61years, Ellen Moss Fox; his parents; and his siblings. He is survived by two children, Karen Fox (Bill) McCray of Beavercreek and Jon Hartley (Kathy Barwick) Fox of Grass Valley, CA; two grandsons Nick (Brandi) Verceles of Chicago, IL and Brian McCray (fiancée Jennifer Gammie) of Beavercreek; two great-granddaughters Charlie & Winnie Verceles of Chicago, IL; and numerous nieces and nephews. Services will be 2 PM Mon. March 19 at Stubbs-Conner Funeral Home in Waynesville. Pastor Martin Roth and Pastor Jason Sharp will be officiating. Burial at Miami Cemetery, Corwin. The family will receive friends from 12:30 PM – 2 PM Mon. at the funeral home. In lieu of flowers, contributions may be made to the Waynesville Lions Club, c/o Jeff Wilson, 8163 Cierra Way, Waynesville, Ohio 45068, to go toward a scholarship for a Waynesville High School student. Condolences at www.stubbsconner.com.

Fox, Lyle Scott, age 93, a longtime resident of Warren County, died March 12, 2018 at his residence at Brookdale Beavercreek, where he had lived since October. Born June 9, 1924, in rural Warren County to Frank and Grace Fox, Lyle was the youngest... View Obituary & Service Information

The family of Lyle S. Fox created this Life Tributes page to make it easy to share your memories.

Send flowers to the Fox family.