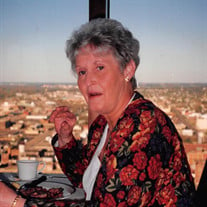 Walker, Mabel A., age 82, of Waynesville, passed away Sunday, June 27, 2021 at Hospice of Butler and Warren Counties. Mabel graduated from Waynesville High School, class of ’56. She retired as Deputy Treasurer from the Warren County Auditor’s Office after many years of service to the county. She attended Crossview Christian Church in Waynesville for several years. Spunky, supportive, independent, giving, adventurous, and always helping others, Mabel had a heart of gold and was known for being the one that got things done in the family. She greatly enjoyed mushroom hunting in the spring and flower and vegetable gardening during the warmer months, which resulted in canning in the fall. She was also an excellent cook and became well known for her delectables. Her pineapple upside-down cake, peach cobbler, and Italian dishes were some of her most popular, but she was always cooking something that tasted delicious. Among many things, she will be remembered for how much she enjoyed traveling. Over the years, she enjoyed trips to trips to Alaska, Grand Cayman, and the Appalachian Mountains via the Blue Ridge Parkway, but always by car and often for the purpose of spending time with her parents and family. By far, however, Florida was her favorite place to travel. She was preceded in death by her spouse Bud Baker and later by Ed Walker; her daughter Sheila Lanier; her parents Findley and Laura Brown; two brothers Howard and Kenney Brown; and two sisters Alberta Hoak and Mary Hardin. She is survived by her son Allen Wisecup; six grandchildren Amanda (Eli) Burnett, Laura Rigdon, Erica (Steve) Blevins, Justin Shaffer, Jesse Wisecup, and Kylie Tracy; 11 great grandchildren; one brother Sam Brown; and four sisters Virginia Hill, Joan (Dale) Dakin, Janice (Elmer) Powell, and Charlotte (Bob) Lucas. Private graveside services will be held at Miami Cemetery, Corwin. Stubbs-Conner Funeral Home in Waynesville is serving the family. Condolences at www.stubbsconner.com.

Walker, Mabel A., age 82, of Waynesville, passed away Sunday, June 27, 2021 at Hospice of Butler and Warren Counties. Mabel graduated from Waynesville High School, class of &#8217;56. She retired as Deputy Treasurer from the Warren County... View Obituary & Service Information

The family of Mabel A. Walker created this Life Tributes page to make it easy to share your memories.

Send flowers to the Walker family.