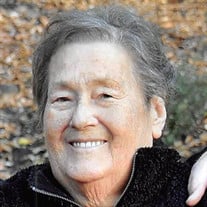 MEASEL, Malinda, age 77, of Waynesville, passed away Wed. Dec. 26, 2018 at Ohio Living Quaker Heights in Waynesville. Malinda worked many years as an RN in a variety of different facilities. She also worked several years as an office manager in her husband’s business, Pyramid Riggers Inc. Malinda was fun-loving, outgoing, nurturing, and devoted in her faith in God. She was also known to be silly at times. Her hobbies included sewing, care for her goats, her Mini Cooper cars, and checking in with family and friends on the phone. Malinda enjoyed singing, especially to her grandchildren, and as a person who was very family oriented, she cherished time with her kids, grandchildren, and great grandchildren. She also enjoyed time spent with the gang at “the breakfast club,” first at Der Dutchman and more recently at Quaker Heights. Among the many things, she will be remembered for her love of Andes Chocolate Mints and for often giving away Werther’s Original Caramel Coffee Hard Candies. She was preceded in death by her husband Donald in 2007 and her parents Owen and Alma McAfee. She is survived by four sons Eric (Jackie) Measel, Brad (Jodie) Measel, Brian Measel, and Shawn (Nicholette) Measel; 10 grandchildren; 10 great grandchildren; and two brothers Owen McAfee and Everett (Mary) McAfee. Funeral services will be held 1 PM Fri. Dec. 28 at Stubbs-Conner Funeral Home in Waynesville. Chris Colvin will be officiating the service. Burial will be in Miami Cemetery, Corwin. The family will receive friends one hour prior to the service Fri. at the funeral home. In lieu of flowers, contributions may be made to the Warren County Veteran Services, Transportation Department, 320 East Silver St, Lebanon, OH 45036, as they assisted Malinda so many time with her appointments. Condolences at www.stubbsconner.com.

MEASEL, Malinda, age 77, of Waynesville, passed away Wed. Dec. 26, 2018 at Ohio Living Quaker Heights in Waynesville. Malinda worked many years as an RN in a variety of different facilities. She also worked several years as an office manager... View Obituary & Service Information

The family of Malinda Measel created this Life Tributes page to make it easy to share your memories.

Send flowers to the Measel family.