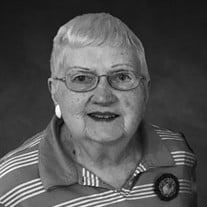 FINK, Marcille Ann “Marcie” Bowser Age 87, of Waynesville, passed away Monday, Jan. 24, 2022, in Cleveland. Born Sept. 27, 1934, to Ethel and Orville Bowser, Marcie grew up on a farm near Brookville, Ohio. After attending grade school in a two-room schoolhouse, she graduated from Dixie High School and became the first in her family to attend college, earning a degree in education from Miami University in 1956. She taught second grade for 11 years in Columbus and Dayton-area schools. Marcie first met her husband of 53 years, Robert “Bob” Fink, around 1957 on a train between Columbus and Dayton — ironic, as Bob was a model railroader hobbyist. Ten years later, they married and spent their honeymoon at the National Model Railroad Association convention in Miami Beach, Florida. Marcie was a dedicated mother, school volunteer and friend. She enjoyed crafts of all kinds, particularly those that involved sewing, and she spent many hours with friends and neighborhood children working on craft projects. She worked at the polls for every election. Marcie played to win at Chinese Checkers and did so even two days before her death. That day, she played against her daughter and granddaughter; she won both games. Bob preceded Marcie in death in May 2021. Marcie is survived by her daughter, Cindy Fink; her son-in-law, Kemp Jaycox; her granddaughter, Kate Jaycox; her goddaughter, Robyn Clayton; and numerous cousins. A private graveside service will take place on Feb. 12 at the Bowser family plot in Sugar Grove Cemetery, West Alexandria. The family has established a memorial scholarship in Marcie’s name at Miami University for education majors who are the first generation in their family to go to college. Memorial gifts can be added to this scholarship fund at www.givetomiamioh.org/MarcieBowserFinkScholarship. Condolences can made at www.stubbsconner.com.

The family of Marcille Ann "Marcie" Fink created this Life Tributes page to make it easy to share your memories.

Send flowers to the Fink family.