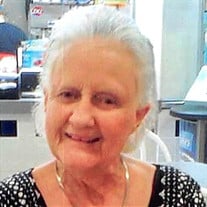 Charlton, Margie A., age 79, of Camden and formerly of Springboro, passed away Thurs. Aug. 16, 2018 at Kettering Medical Center. Margie was a member of Shiloh’s Candlestick Church in Middletown and a member of the Fraternal Order of Eagles since 1971. Fun loving and cordial to all she met, she could also be ornery and funny at times. She greatly enjoyed taking care of kids, country music, crossword puzzles, and dancing. She will be especially remembered for her delicious potato pancakes and the many family trips to Texas that always included a stop at Loretta Lynn’s Ranch in Hurricane Mills, TN. She was preceded in death by her husband, Clyde, in 2006; her parents Harry and Carrie Bolser Sr.; three brothers Floyd, Harry Jr., and Raymond Bolser; and four sisters Rosella Bolser, Laura Moore, Betty Dodge, and Patsy Enix. She is survived by four children Juanita Charlton, Bob Charlton, Tim Charlton (Teresa), and Joe (Cindy) Charlton; six grandchildren Michael Charlton, Ryan Charlton, Peyton Charlton, Samantha Gibson, Alexis Lambert, and Joseph Lambert; three great grandchildren David, Addy, and Grayson; sister-in-law Brenda Sue (Odis) Cook; and many nieces and nephews. Funeral services will be held 11 AM Tues. Aug. 21, 2018 at Stubbs-Conner Funeral Home in Waynesville. Burial will be in Miami Valley Memory Gardens. Pastor Charlene Allen will be officiating the services. The family will receive friends 6-8 PM Mon. at the funeral home. If desired, contributions may be made to the Alzheimer’s Association. Condolences at www.stubbsconner.com.

Charlton, Margie A., age 79, of Camden and formerly of Springboro, passed away Thurs. Aug. 16, 2018 at Kettering Medical Center. Margie was a member of Shiloh&#8217;s Candlestick Church in Middletown and a member of the Fraternal Order of... View Obituary & Service Information

The family of Margie A. Charlton created this Life Tributes page to make it easy to share your memories.

Charlton, Margie A., age 79, of Camden and formerly of Springboro,...

Send flowers to the Charlton family.