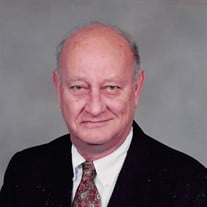 FLICK, Mark Lowell, husband, father, grandpa, brother-in-law, son, Christian, engineer, history-buff, craftsman, animal-lover, and tradition-maker passed away on Monday, September 24, 2018, at the age of 78, surrounded by his family in his home. He is survived by his devoted wife, Charleen Mehaffie Flick, three children and their spouses, four grand-children, and his beloved cat. Mark was born in Cincinnati on February 11, 1940. He was the only child of Vernon and Gladys Flick. Growing up in Hyde Park, he began his faith journey at the Walnut Hills Baptist Church. He graduated from Withrow High School in 1958. In November 1962, he married Elizabeth Hammel and welcomed three children, Nicole Louisa, Mark Christopher and Michael West into his life. He studied advanced mathematics, engineering, art, and photography at the University of Cincinnati, graduating with a Bachelor of Science. On August 22, 1992, he married Charleen Mehaffie and lived a happy and full life in Lebanon, Ohio, sharing cherished memories with the Mehaffie family. Mark was intelligent, creative, and curious. He restored cars, built houses and furniture, painted, and sketched. He loved a big, bold, American red wine and a mean German potato salad was his trademark dish. Writing was a huge part of Mark’s life. The breadth of his writing included computer programs and his personal journal, in the tradition of his father. His letters and postcards from around the world continue to be treasured by their recipients. Travel defined and shaped Mark all through his life. He visited every state in the Union. He had a particular fondness for steam locomotives, and in that vein, he and Charleen criss-crossed America on Amtrak. Hand-in-hand with Charleen, he travelled to 70 countries across 6 continents. In July 1969, he crossed an item off his bucket list when he bought a one-way ticket to Kennedy Space Center to witness the launch of Apollo 11. He was a champion of his machine-tool industry. Through the years, he contributed to companies including Carlton Machine Tool, LeBlonde, Advanced Machinery, and J&M Machinery. Yet to his family, his biggest contributions were the traditions he established like annual Thanksgiving at the Golden Lamb and the horse parade in Lebanon. Mark began his life-long love of wood working in junior-high shop class. His collection of work includes a grandfather clock and a nautical theme bedroom set for each of his young sons. On a grander scale, he built a California contemporary home in Maineville, Ohio. In retirement, Mark built flower boxes and restored many fine woodworking pieces and fixtures for the Golden Lamb, and for customers of Flick’s Fine Furniture all around Lebanon. Mark made meticulously detailed bird houses combining his creativity, artistry, and precision. They are truly works of wonder. He passed his gifts of craftsmanship and artistry on to his sons and grandchildren. We are excited to see what the next generation of artists will create. The family will receive friends 5-8 PM Fri. Sept. 28 at Stubbs-Conner Funeral Home in Waynesville. Funeral services will be held 12 PM Sat. Sept. 29 at the Waynesville United Methodist Church. Interment will follow the funeral in Miami Cemetery, Waynesville. In lieu of flowers, contributions may be made to Hospice of Cincinnati. Condolences may be made to the family at www.stubbsconner.com. Mark, we lift our hearts and share with thee, God called you home, He has set you free.

The family of Mark Lowell Flick created this Life Tributes page to make it easy to share your memories.

Send flowers to the Flick family.