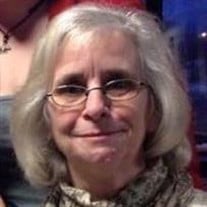 BLEVINS, Mary A., age 71, of Oregonia, passed away Thurs., Nov. 28, 2019 at her residence. Mary was a 1966 graduate of Lebanon High School. Happy, spunky, quirky, and occasionally mischievous in a fun way, Mary was certainly the matriarch of her family. Both Mary and her husband were from very large families and they took great pride in getting the families together by hosting numerous cookouts. Over the years, she greatly enjoyed the many trips around the world to visit her son while he was in the military. Her favorite trips included trips to England, Hawaii, and Washington D.C. When her children were young, she also cherished the many trips to West Virginia to visit family each summer. Among many things, Mary will be remembered for her immense facts regarding the former U.S. Presidents, all of the birthdates of her numerous family members, her love of watching the Hallmark Channel and game shows on tv, and her fondness of Pepsi and popcorn. Her lunches out with the girls, and especially her love of playing bingo and going to the casino to play the slots were some of her favorite hobbies. She was preceded in death by her parents William Rommes and Dorothy Willard; one brother Steve Rommes; and two sisters Linda Rommes and Carol Age. She is survived by her husband of 52 years, Joe; son Joseph Blevins (Tanya Leshko); daughter Marla (Scott) Feldmann; six grandchildren George, Rowan, Henry, Gwyn, Flynn, and Mimi; four brothers Bill (Gloria) Rommes, Bob (Claudia) Rommes, Jay Rommes, and Brian (Janet) Rommes; two sisters Chris (David) Thompson and Lee Ann (Tim) Williams; and many nieces, nephews, and extended family members. A celebration of life gathering will be held 2 - 4 PM Sun., Dec. 1 at Stubbs-Conner Funeral Home in Waynesville. Immediately following the celebration of life gathering at the funeral home, a reception will be held at St. Augustine Catholic Church in Waynesville. If desired, contributions may be made to Queen City Hospice or St. Augustine Catholic Church. Condolences at www.stubbsconner.com.

BLEVINS, Mary A., age 71, of Oregonia, passed away Thurs., Nov. 28, 2019 at her residence. Mary was a 1966 graduate of Lebanon High School. Happy, spunky, quirky, and occasionally mischievous in a fun way, Mary was certainly the matriarch... View Obituary & Service Information

The family of Mary A. Blevins created this Life Tributes page to make it easy to share your memories.

Send flowers to the Blevins family.