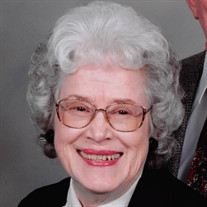 KRUER, Mary E., age 96, of Waynesville, passed away Wednesday, December 16, 2020 at Randall Residence of Centerville. Mary came to Ohio during WWII to support the war effort, working at DESC in Dayton. She also worked as a licensed beautician and a telephone operator for several years. Ultimately, she devoted her life to raising her family and assisting her husband on the farm. She was a member of the Waynesville United Methodist Church. Mary had tremendous faith in God, routinely studying her Bible and taking time for daily devotions. When the situation arose that she couldn’t attend church in person, she would watch one of the church services available on television. As a member of the United Methodist Women’s (UMW) group, she received the Special Membership Mission Recognition award in 2002 for her quiet and behind-the-scenes support of the church’s mission work. Loving, caring, giving, generous, and creative, Mary was a dedicated wife, mother, and grandmother. Her creativity was exhibited by her desire to draw and her love of sewing. She created several home furnishings over the years including the curtains, and made the costumes for her daughter’s school plays when they were young. While Mary was working during her early days, she would always send money back home to her family in Kentucky. While helping her husband on the farm, she always took time to can some of the homegrown vegetables each year. Among many things, she will be especially remembered for her love of baking. Always experimenting with new recipes and ideas, it was her homemade caramel candy, Danish pastries, and baked pies that will be especially remembered. She was known as the “Esther Price” of the Methodist church by some members of the UMW, due to her baking skills and love of making sweets. The way in which she always insisted that the grandchildren start their Trick or Treat adventures at her home, making a big deal out of the kids’ costumes before going out to the public, will always be remembered as special moments with grandma. She was preceded in death by her husband, Charles “Chick” in February of this year; her parents Linzie and Cora Hayes; four brothers Thomas, Robert, Charles, and George Hayes; and three sisters Corilda Hayes, Lorena Small, and Nancy Sue Hayes. She is survived by two daughters Charlotte (Bryan) Austin and Rose Mary (Tom) Regan; and four grandchildren Michael Austin, Max Austin, Dillon Regan, and Caitlin Regan. Funeral services will be held 10 AM Tuesday, December 22 at Stubbs-Conner Funeral Home in Waynesville. Burial will be in Miami Valley Memory Gardens. Joni Manson and Brian Blankenship will be officiating. The family will receive friends 6 - 8 PM Monday, December 21 at the funeral home. If desired, contributions may be made to Ohio’s Hospice of Dayton. During this difficult time, if you are feeling ill or unhealthy in any way, you are encouraged to pay your respects in alternative methods, such as sending a sympathy card or sharing a memory though our online tribute wall. In addition, the services will be streamed live via the internet. If you wish to view the services on the Webstream, please click the link accessible from tribute wall tab of Mary's page on www.stubbsconner.com. Be sure to bring your mask to wear while you are inside the funeral home.

KRUER, Mary E., age 96, of Waynesville, passed away Wednesday, December 16, 2020 at Randall Residence of Centerville. Mary came to Ohio during WWII to support the war effort, working at DESC in Dayton. She also worked as a licensed beautician... View Obituary & Service Information

The family of Mary E. Kruer created this Life Tributes page to make it easy to share your memories.

Send flowers to the Kruer family.