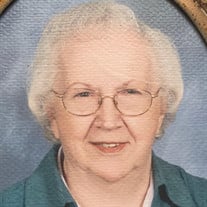 BENTON, Maxine, age 95, of Waynesville passed away Wed. Jan. 2, 2019 at her residence. Maxine was born and raised on a farm in Neosho, Missouri. She graduated from Neosho High School in 1941. Maxine met Dorsey Benton while he was stationed at Camp Crowder just outside of Neosho. They were married on August 10, 1944. When he was discharged from the service in the spring of 1946, they moved to Moorehead, Kentucky so he could complete his college education. During this time, their three children were born: Kay, Lynne, and Jim. She worked in her home until her children were in junior high, and then worked and taught students while earning a Master’s degree in Education from Miami University. In August 1953, Maxine accepted a teaching job with the Wayne Local School district. Maxine taught at Springboro Schools for two years before accepting a teaching job at Waynesville Elementary. She was active in the Ohio Education Association and provided her opinion on many topics in the education field. She retired in 1984 after 25 years as a first grade teacher. During that time, she had the privilege of teaching and shaping over 600 young minds. She was a member of the Waynesville United Methodist Church and attended there for over 60 years. For over 20 years, she was a member of a quilt group. She greatly enjoyed her group of friends. Maxine was a loving mother who will be remembered for sacrificing a lot for her children. She was preceded in death by her husband, Dorsey, in 2005; one grandson Brian James “BJ” Benton; and her parents James and Bessie Branham. She is survived by her son Jim (Deborah) Benton; two daughters Kay Benton and Lynne (Joe) Barnett; five grandchildren Joseph Barnett, Kayci Barnett, Michael (Jenny) Benton, Mary (Fil) Araujo, and Emily Benton (fiancé Mike Matheny); and three great grandchildren Macey Benton, Mikey Benton, and Julia Benton. The family will receive friends 1:00 PM – 3:00 PM Sun., Jan. 6, 2019 at Stubbs-Conner Funeral Home in Waynesville. A funeral service will be held 3:00 PM Sun. at the funeral home. If desired, contributions may be made to the Hospice of the Miami Valley. Condolences at www.stubbsconner.com.

BENTON, Maxine, age 95, of Waynesville passed away Wed. Jan. 2, 2019 at her residence. Maxine was born and raised on a farm in Neosho, Missouri. She graduated from Neosho High School in 1941. Maxine met Dorsey Benton while he was stationed... View Obituary & Service Information

The family of Maxine B. Benton created this Life Tributes page to make it easy to share your memories.

Send flowers to the Benton family.