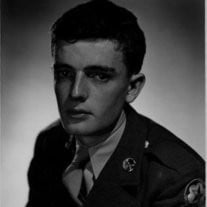 COLLETT, McKay “Mac”, 88, passed away 30 July 2013 at Quaker Heights Nursing Home, Waynesville, Ohio. McKay was born 21 January 1925 in Pelham, New York to Cora (neé Cahill) and Maurice Collett, the third of four children. McKay served in the army in WWII in the 1st Infantry “Big Red One” during the Normandy invasion, later as a French interpreter and an ambulance driver. He also served in the 116th Infantry. McKay graduated from Ohio State University in 1949 with a degree in agriculture and was a proud member of Sigma Alpha Epsilon fraternity. He then worked for the DuPont Company from 1949 to 1980 in sales, plastics, and advertising. He sold a new synthetic urea feed “262” to cattle farmers; his territory was over 11 Midwestern states. Due to the large geographic area he needed to cover, McKay learned how to fly in order to get to reach and pitch his product to as many farmers and feed manufacturers as possible. In a Cessna Encore airplane he had his typewriter, suitcase and sample feed bags, and was constantly on the go. He ultimately met his first wife Marcia (neé Race) Collett Airey and moved to Wilmington, Delaware. He transferred from sales to advertising, working first in plastics and then on the campaigns for Corfam fabric, Cronex Xray film, Silverstone Teflon, and finally in the pharmaceutical industry with Endo, a branch of the DuPont Company. At the age of 55, McKay left the DuPont Company and began another career in farming on the family land near Waynesville, Ohio. He moved into the Hole in the Woods farmhouse, a venerable homestead built in 1820, which was the house where his father was born. There he lived with his adored wife of 29 years, Dianne (neé Venekamp) Collett. He raised sheep and cattle, built a pond and a swimming pool, served one term as president of the Clinton County Farm Bureau, and assisted scores of retirees in completing their taxes through his involvement with the AARP. He also loved fixing things and spent hours in his workshop building and tinkering. McKay was a pioneer and a jack of all trades. He taught himself how to sail in Long Island Sound as a young boy, and built a Sunfish from a kit. He raced around Block Island, and he loved to charter sailboats in the Bahamas, always inviting the entire family. His second aircraft was a Beechcraft Bonanza N5204C which he cherished, flying over the east coast and Ohio. He tackled challenges head-on and obtained an instrument rated flight status so that at any time, he could go anywhere. He enjoyed photography and with his Rolliflex camera captured his children’s escapades on film, developing pictures in the basement dark room. McKay was a devout Christian and very involved in the Jonah’s Run Baptist Church. He loved to sing hymns and loved to read the Bible. Never one to miss an opportunity to give advice, McKay’s message of persistence, forward thinking, and faith has been heard by countless people. He adored surrounding himself with young people, innovative ideas, and laughter. McKay was known throughout Ohio as being very involved in the annual Collett-McKay picnic now in its 148th year. He has written much on the family traditions of these wonderful pioneer families. Finally, and to be complete, McKay needs to be remembered for his love of baseball. Beginning as a stoop ball player with his brother, Maurice, in New York, McKay became a Philadelphia Phillies fan during his DuPont career. His love for the game caused him to become an enthusiastic Little League umpire, where he gained a reputation as an expert of the rules, with an accurate eye. Upon retirement, he transferred his allegiance and became a tried and true Cincinnati Reds fan. McKay never went anywhere without his Reds cap on his head, and prided himself on knowing the stats on every Reds player. McKay is survived by his wife Dianne, his children Virginia Green, Cora Breuner and Daniel (Penny) Collett and grandchildren Jane (Andy) Butler, Mary (Eric) Dudley, Quentin Haigh and Charlotte Haigh, McKay Breuner, Maggie Breuner and William Breuner, Hannah Collett, Julia Collett, and Seth Collett, great-grandchildren Collette and Anderson Butler, and nieces and nephews. He was honorary father to Jim (Jackielyn) Turner and Sherry (Ken) Spires; honorary grandfather to Leslie (Trent) Katter, Christopher, Nicholas, Michael, Matthew and Katie Spires, and James Brewster Turner IV, and great-grandchildren Emma and Samuel Katter. He is preceded in death by his parents, his sisters Jane Wilcox and Margaret Mayo-Smith, brother Maurice Collett, his daughter Amy (Richard) Keppler, and honorary son Michael Turner. Funeral Services will be held Saturday, August 10, 2013 at Jonah’s Run Baptist Church, Waynesville, Ohio, with a visitation from 10:00 AM to 11:00 AM, followed by a service at 11:00 AM, Reverend Roger Hilbert presiding. Following, will be a graveside service at Miami Cemetery, Corwin, Ohio. Thereafter, the family will greet family and friends for fellowship and a feast of Thanksgiving at the church. Floral tributes may be sent to Jonah’s Run Baptist Church, 9614 State Route 73 West, Waynesville, Ohio 45068 on the day of the service. Stubbs- Conner Funeral Home, Waynesville, Ohio is handling the arrangements. Condolences at www.stubbsconner.com. “Praise God, from whom all blessings flow Praise Him, all creatures here below Praise him above, ye the heavenly host Praise Father, Son and Holy Ghost” Doxology

The family of McKay Collett created this Life Tributes page to make it easy to share your memories.

Send flowers to the Collett family.