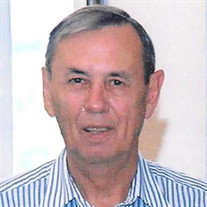 COUCH, Mitchel, age 86, of Waynesville, passed away Monday, December 20, 2021, at St. Leonard’s Franciscan Living Community in Centerville. Mitchel retired from Deerfield Manufacturers in mason as a plant supervisor after 32 years of service to the company. In addition, he was a member of the Waynesville First Baptist Church. Hardworking, caring, and kind, Mitchel raised his children with strong mindfulness but became gentle and easygoing when the grandkids came along. His hobbies included fishing and watching western movies. He also enjoyed playing the guitar, and especially during his younger years, he spent many evenings with his brother playing his guitar and singing for hours. When his children were growing up, trips to Gatlinburg became a tradition, either staying in a pop-up tent or a camper. With the grandchildren, he loved taking them on vacation, and the tradition switched to beach vacations to enjoy sun and sand in destinations all over the southeastern coast of the United States and Florida. Always a good neighbor, Mitchel encouraged the children in the community to come and enjoy popsicles with his grandkids. He collected old-style cast model cars and pocket knives. It was his style always to carry a knife in his pocket. Among many things, he will be remembered for how much he enjoyed a big breakfast, so much so that if staying in a hotel, if the hotel offered complimentary breakfast, it became the amenity that made him choose to stay there. Country cooking, in particular, was a favorite of Mitchel. In addition, he cooked some memorable country meals of pinto beans with ham, hamburger stew, and homemade sauerkraut with hot dogs that will always be remembered fondly by family. He was preceded in death by his wife, Sharon, in 2020; his parents, Zeke Couch and Mary Jane Fields; and one brother Bert Couch. He is survived by four sons Mike (Mary) Couch, Zeke (Sheila) Couch, Brad (Melanie) Couch, and Dwayne (Tina) Couch; 11 grandchildren; 12 great-grandchildren; one brother Raymond (Susie) Couch; and two sisters, Thelma Fugate and Martha Greer. The family will receive friends 11 AM - 12 PM Monday, December 27 at Stubbs-Conner Funeral Home in Waynesville. A funeral service will immediately follow the visitation at 12 PM on Monday at the funeral home. Pastor Darrell Messer will be officiating the services. Entombment will be held at Heritage Hills Memorial Gardens. If desired, contributions may be made to St. Leonard’s Franciscan Living Community or Hospice of Dayton. In addition, the family would like to thank Sherry Smith and all of the neighbors and community members, who provided so much care and support to Mitchel and his family over the past several years. Condolences at www.stubbsconner.com.

The family of Mitchel Couch created this Life Tributes page to make it easy to share your memories.

Send flowers to the Couch family.