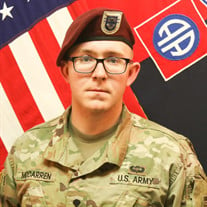 SGT. Noah P. McCarren, described affectionately as a child of God, age 24, of Lebanon and stationed at Ft. Bragg, North Carolina passed away Saturday, May 15, 2021. Noah was a lifelong member of Resurrection Lutheran Church in Lebanon, Ohio, and a 2015 graduate of Lebanon High School. During high school, Noah ran cross country and played Lacrosse. In addition, he was a four year cadet in the Junior AFROTC program at OH-771. He attended the University of Cincinnati while simultaneously participating in the AFROTC program. He enlisted into the U.S. Army on August 7, 2017. He attended basic training and airborne school in Ft. Benning, Georgia before being transferred to Ft. Bragg, North Carolina. Noah was a member of the 1st Platoon/Charlie Company/2-325 Airborne Infantry Regiment/2nd Brigade Combat Team and a veteran of Operation Inherent Resolve. He spent his time overseas in Iraq and Kuwait serving his country. Respectful, confident, outspoken, intelligent, brave, selfless, dedicated, loyal, and a good friend, Noah lived life to the fullest. He chose his words carefully, appreciated structure, and had a deep belief and conviction in God. He commanded respect without trying and loved his family. An avid reader, he loved the outdoors and was described as a person who actually enjoyed sleeping in the dirt. His outdoor hobbies included hunting, fishing, camping, mountain biking, and hiking. His literature of choice included history, especially military history, westerns, science fiction, and anything newsworthy that included current events. He had an appreciation for geography and won a geography bee during his young school days. He had a Celtic heritage and enjoyed participating in Celtic related festivals and events, particularly the Celtic festival and parade in Dayton each year. During high school, he and his friends often wore kilts to school on Thursdays in appreciation for the Celtic heritage. Among many things, he will be remembered for his love of visiting the beach each summer while growing up. The Carolinas, and the Outer Banks in particular were a favorite family beach destination. He and his fiancé enjoyed several trips to the mountains of North Carolina, with White Side Mountain being most noteworthy. He was preceded in death by his grandmother Barbara McCarren. He is survived by his fiancé Jaclyn “Jackie” Brake; his mother Dr. Michele Kegley (Edward Romanchek) and father Paul (Cheryl) McCarren; grandparents Dennis (Vicki) McCarren and Randal and Fern Kegley; two sisters Hannah McCarren and Hope McCarren (Kenneth Day Jr.); four brothers Dr. Christian (Dr. Brittany) Romanchek, Bryce Romanchek, Samuel Worchester, and Isaac Worchester; uncles Scot (Julie) McCarren and CMSGT Shawn (Melissa) Kegley; and cousins Ella, Molly, Olivia, and Sam. The family will receive friends 4:00 - 8:00 PM Thursday, May 27 at Stubbs-Conner Funeral Home in Waynesville. A celebration of life service will be held 10:30 AM Saturday, May 29 at the Resurrection Lutheran Church in Lebanon. Burial with full military honors will immediately follow the service at Miami Cemetery in Corwin. Pastor Corey Wagonfield will be officiating. If desired, contributions may be made to the Ohio Division of Wildlife (ODNR) c/o Wildlife Central Office, 2045 Morse Road Building G-1, Columbus, OH 43229-6693 and/or the Mary L. Cook Public Library, 381 Old Stage Rd., Waynesville, Ohio 45068. The celebration of life service will be streamed live via the Resurrection Lutheran Church's Facebook page. You may use the following link https://www.facebook.com/ResurrectionLuthern/ to access it when the service starts. Condolences at www.stubbsconner.com.

The family of SGT Noah P. McCarren created this Life Tributes page to make it easy to share your memories.

SGT. Noah P. McCarren, described affectionately as a child of...

Send flowers to the McCarren family.