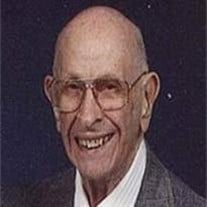 Norman Wayne Henry of South Bend, 93, beloved husband, father, grandfather, and great-grandfather, passed away on Good Friday, April 10, 2009, at the Quaker Heights Nursing Home in Waynesville, OH. Norman was born October 15, 1915 to William Oliver and Vida Iris (nee Ourebeck) Henry in South Bend, Indiana. On January 31, 1941, he married Geneva Margaret Powell. Norm and Margaret had two children, Dennis Wayne, born in 1949, and Kathleen Ellen, born in 1951. In 2005, Norm and Margaret moved to Waynesville. Norm graduated from Riley High School in 1934. He worked several years at Associates Investment Company and the United States Postal Service before working for the Studebaker Corporation in 1942 as a tabulating clerk. He was later promoted to Supervisor of Data Processing. He worked at Studebaker until it closed its South Bend operations in 1967. He then took courses in computer processing and worked as an Instructor and Department Head of Data Processing at Indiana Vocational Technical College. Norm retired from the Alford Company in Niles, Michigan. There are countless reasons why Norman was loved by his family and others whose lives he touched. Norm was a loving husband, father, grandfather, great-grandfather, neighbor and friend. He was a devoted and active member of his church, the First Brethren Church of South Bend. He was a loving, funny, brilliant, kind, and caring man. He loved Notre Dame, fishing, sports, tending to the birds and squirrels, playing cards, geography, solving puzzles, and traveling. Norm was a perpetual student: he was always eager to learn about new subjects and how things worked. Norm always found the positive in every situation and found great joy in the little things. To know Norman was to love him, and his family feels deeply honored to have had him in our lives for so long. Norm is survived by his wife Geneva Margaret of Waynesville; daughter Kathy Estabrook of Waynesville; three granddaughters: Rachel Bock, Ginger Bock, and Robyn Olivo; two grandsons: Thomas and James Henry; four great-grandsons: Ahmad, Noah, and Gabriel Bock-Marshall and Joseph Olivo; daughter-in-law Barbara Prater; and two grandsons-in-law: Lester Marshall and Joseph Olivo. Norm was predeceased by his parents, his son Dennis, his brothers Calvin and Robert Henry, and his sister Marcelle Nagy. A memorial service will be held on Wednesday April 15, 2009, at 2:00 p.m. at the Stubbs-Conner Funeral Home in Waynesville, OH. Please send contributions to Hospice of Dayton 324 Wilmington Ave. Dayton, OH 45420 Online condolences may be made to the family at stubbsconner.com Rest in peace, Norm, and be careful up there.

The family of Norman Wayne Henry created this Life Tributes page to make it easy to share your memories.

Send flowers to the Henry family.