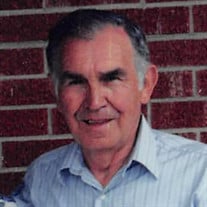 COOK, Odis, age 93, of Waynesville, passed away Monday, November 2, 2020 at Sycamore Glen Health Center in Miamisburg. When he was young, Odis worked in the coal mines of Kentucky. He saved up enough money during those early years to buy a truck, and went into the business of hauling coal for a living. Several years later, after moving to Ohio, he made a living selling timber. He ultimately spent the majority of his later years selling tires out of the garage at his home in Corwin. Also out of his home, he performed some small mechanic work with his son. He was a faithful member of the Full Gospel Tabernacle in Waynesville. Over they years, he became quite knowledgeable of the Bible. Easy-going, family oriented, and accepting of others, Odis had a heart of gold and was always inviting others to come into his home or sit on his porch for a chat. He was frugal by nature and would never hesitate to council others on how to save money or strike a deal. He kept a beautiful vegetable garden at his home, raising the plants from seeds in his greenhouse out back. If you knew Odis, you knew how beautiful he kept his garden and how much he enjoyed canning in the fall with his wife. He also enjoyed listening to gospel, bluegrass, and country music, feeding and watching the birds, visiting Amish Country, and walks with his wife outside-especially during the springtime while hunting for morel mushrooms. He was known for being handy, having built his personal home and two others over the years. Among many things, he will be remembered for his love of taking home videos and then watching those videos over and over while reminiscing over the good memories he made. If you stopped by his home for a visit however, you would almost always find the television playing an old western movie. The annual trips he made with his wife to Cocoa Beach in Florida each year during February and March, will always be remembered as some of his fondest memories. Walks on the beach with his daughter, glass bottom boat rides, and visits to Cypress Gardens were some of the highlights of those Florida trips. He was preceded in death by his wife Brenda “Sue" in 2018; one son Jerry Cook; his parents John and Bessie Cook; seven brothers Roy, Rev. Sherman, Henry, Edward, Acy, Ernest, and Brown Cook; and three sisters Delta Gabbard, Myrtle Malicote, and Marie Jones. He is survived by his son Garry Cook; daughter Norma Jean Cook; step children Tina Kilburn, Jamie (Elgie) Alexander, Diann (Grant) Alexander, and Bowie Ferguson; nine grandchildren; eight step grandchildren; many great and great great grandchildren; and close friend Mike Spencer. Funeral services will be held 1 PM Saturday, November 7 at Full Gospel Tabernacle in Waynesville. Burial will be in Miami Cemetery, Corwin. Tim Noble and Don Ingram will be officiating there services. The family will receive friends 11 AM - 1 PM Saturday at the church. Stubbs-Conner Funeral Home in Waynesville is serving the family. During this difficult time, if you are feeling ill or unhealthy in any way, you are encouraged to pay your respects in alternative methods, such as sending a sympathy card or sharing a memory though our online tribute wall. Be sure to bring your mask to wear while you are inside the church. Condolences at www.stubbsconner.com.

COOK, Odis, age 93, of Waynesville, passed away Monday, November 2, 2020 at Sycamore Glen Health Center in Miamisburg. When he was young, Odis worked in the coal mines of Kentucky. He saved up enough money during those early years to buy a... View Obituary & Service Information

The family of Odis Cook created this Life Tributes page to make it easy to share your memories.

Send flowers to the Cook family.