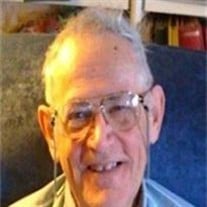 Justice, Ralph Kenneth & Charlotte Mae. Ralph was born April 12, 1927 & died April 4, 2012. Charlotte was born July 7, 1927 & died April 14, 2012 Ralph and Charlotte were both born in Portsmouth, OH. They grew up in Sciotoville, OH and were married on December 6, 1947. They raised their two children, Kay and Kenneth, in Waynesville, OH. In 1989 they retired, traveling the United States and Europe until they decided to settle in McAllen, TX in the winters and Waynesville in the warmer months. Wherever they traveled they made friends and belonged to several square dancing groups. In 2005 they moved to Dover, New Hampshire to be near their daughter, Kay. They are predeceased by their son, Kenneth, in December 1969. They are survived by their daughter, Kay and her partner, Ann Driscoll of Dover, NH, two grandsons, Jason Cichon and Chad Cichon, Chad’s wife Cassandra Cichon and a grandson, Hunter Cichon, all of South Portland Maine. They are also survived by sister-in-law Rosemary Davis and her children Patricia Van Hook, Joseph Davis, Stephen Davis, James Davis and Peter Davis. Visitation 6-8 PM Friday 4/20/12 at the Stubbs-Conner Funeral Home Waynesville. Services will be 10:30 AM Saturday at the funeral home. Burial to follow immediately at Miami Cemetery. A reception will follow at the Waynesville Methodist Church. Memorial donations will be gratefully accepted in Ralph’s name at Riverside Rest Home, c/o Kristi Hughes Unit 5, 276 County Farm Cross Rd, Dover, NH 03820 and in Charlotte’s name at St. Ann’s Nursing Home, Activities Fund, 195 Dover Point Rd, Dover NH 03820. Online condolences may be made to the family at www.stubbsconner.com.

The family of Ralph Justice created this Life Tributes page to make it easy to share your memories.

Send flowers to the Justice family.