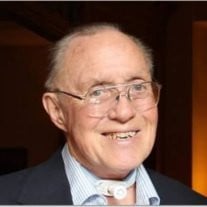 Thatcher, Randall H. “Randy”, age 72 of Waynesville , Ohio passed away on Friday, September 20, 2013. Randy will be remembered by all for his larger than life personality. Randy was an Army veteran, serving 4 years. While serving in Germany he met the love of his life, Mary Thatcher and his interest for clocks evolved. That interest and love turned into his lifelong commitment to his family and Horology. He founded R&M Imports in 1967 and was the former owner of Hershede Hall Clock Company. In 2005 Randy retired and his son, Edward Thatcher continues the tradition. He was an active member and Treasurer of the Buckeye Chapter 23 NAWCC. Randy was also an avid supporter of the Boy Scouts of America. He greatly enjoyed gardening, traveling, collecting and working on clocks, playing bridge and spending time with his family and friends. He was preceded in death by his father, Harry Thatcher. He is survived by his loving wife of 47 years, Mary Thatcher (Hartman); his mother Barbara Thatcher Williams of Lyndhurst, Ohio; children Gayle Thatcher (fiancée Russ Udelhofen) of Denver, CO, Randall Harry, (Dr. Jennifer) Thatcher of Beachwood, OH, Edward (Molly) Thatcher of Waynesville, OH; sister Carol Thatcher of North Canton, Ohio; Five Grandchildren, Desmond, Viktor, Anna, Megan & Clayton Thatcher. The family will receive friends on Wednesday, September 25th from 6 to 8pm at Stubbs-Conner Funeral Home in Waynesville, Ohio. A Celebration of Life will be on Thursday, September 26th at 10:30am at Stubbs-Conner. Burial will follow at Miami Cemetery, Corwin, Ohio. Contributions may be made to the American Cancer Society or Boy Scouts of America. Condolences at www. Stubbsconner.com.

Thatcher, Randall H. &#8220;Randy&#8221;, age 72 of Waynesville , Ohio passed away on Friday, September 20, 2013. Randy will be remembered by all for his larger than life personality. Randy was an Army veteran, serving 4 years. While serving... View Obituary & Service Information

The family of Randall H. "Randy" Thatcher created this Life Tributes page to make it easy to share your memories.

Send flowers to the Thatcher family.