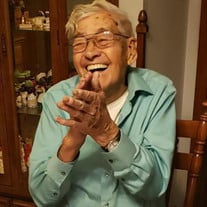 FOX, Ray G., age 91, of Lebanon, passed away Tuesday, January 5, 2020 at his residence. Ray was born November 28, 1929 to Wade and Armina Fox in Jackson County, Kentucky. He had a strong faith in the Pentecostal Holiness Church. He worked several years for Horn & Jones Construction Company until 1969 and then went in business for himself by founding Ray Fox Construction. He owned and operated his own business for 25 years before officially retiring. Giving, kind, compassionate, outgoing, and helpful to people and churches, Ray will be remembered for being a peacemaker and a great listener. He greatly enjoyed singing and playing gospel music with the aid of his guitar. He also enjoyed restoring classic cars over the years, with a 1936 green Chrysler New Yorker being one of his favorite. Following his retirement, he had a goal of seeing most or all of the 50 states, and along with his late wife, they visited all but a couple. He will also be remembered for how much he loved getting together with his family during reunions, working at keeping up his family’s cemetery in Jackson County, Kentucky, and researching his family history with his cousin, Peggy Fox. He was preceded in death by his wife, Marie; his parents; and three sisters May Isaacs, Modena Hammond, and Carolyn Davis. He is survived by his brother Lloyd Fox; two sisters Lucille Campbell and Evalena Huntington, several nieces and nephews; and his God son Jeff (Alice) Kilburn. Funeral services will be held 1 PM Saturday, January 9 at Stubbs-Conner Funeral Home in Waynesville. Burial will be in Miami Cemetery, Corwin. The family will receive friends 12 - 1 PM Saturday at the funeral home. During this difficult time, if you are feeling ill or unhealthy in any way, you are encouraged to pay your respects in alternative methods, such as sending a sympathy card or sharing a memory though our online tribute wall. In addition, the services will be streamed live via the internet. If you wish to view the services on the Webstream, please click the link accessible from tribute wall tab of Ray's page on www.stubbsconner.com. Be sure to bring your mask to wear while you are inside the funeral home. Condolences at www.stubbsconner.com.

FOX, Ray G., age 91, of Lebanon, passed away Tuesday, January 5, 2020 at his residence. Ray was born November 28, 1929 to Wade and Armina Fox in Jackson County, Kentucky. He had a strong faith in the Pentecostal Holiness Church. He worked... View Obituary & Service Information

The family of Ray G. Fox created this Life Tributes page to make it easy to share your memories.

Send flowers to the Fox family.