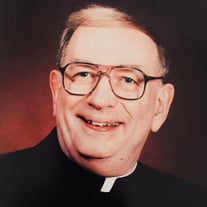 KAMMERER, Father Raymond, age 81, of Waynesville, passed away Sat., Jan. 4, 2020 at his residence. Father Kammerer earned graduate degrees from both the Athenaeum of Ohio (Mount Saint Mary’s of the West) and Xavier University in Cincinnati. He was ordained a priest in the Archdiocese of Cincinnati by Archbishop Karl J. Alter in May 1964. Appointed Associate Pastor of Saint Peter Parish in Huber Heights (1964 – 1971) and to the faculty of John Carroll High School in Dayton, he began a long teaching career along with his pastoral ministry. In 1971, Archbishop Paul Liebold appointed him to the Campus Ministry at the College of Mount Saint Joseph in Delhi Hills (Cincinnati) and at the same time as an instructor at the College. In 1977, Father Kammerer became an adjunct professor at the College Seminary of Saint Pius X in Erlanger, KY. In May 1978, Joseph Carinal Bernardin (then Archbishop of Cincinnati) appointed Father Kammerer to his first pastorate, the Church of Saint Theresa of the Infant Jesus in Covington, OH. He continued to teach at the Erlanger College Seminary until 1982, when he joined the faculty of Chatfield College in Brown County, OH, where he continued the next 35 years. In July 1988, Father Kammerer was appointed Pastor of the Church of the Resurrection in Cincinnati and in July 1995 Archbishop Daniel Pilarczyk appointed him to the pastorate of Saint Augustine Parish in historic Waynesville, OH. In 1994, the Consortium of Cincinnati Colleges and Universities, upon nomination by Chatfield College, awarded Father Kammerer the honor of “Distinguished Professor of the Year” and in March 2003, Chatfield College, in recognition of his long teaching career promoted Father Kammerer to the rank of full Professor. During his long tenure at Chatfield, Father served as Chair of the History Department and then of Religious Studies. Both as a Pastor and as a College teacher, Father Kammerer was well known by students and parishioners alike for his literary works. His publications, “Old Mission San Juan Capistrano” and “A Portrait of Mission Life”, created for the tourist trade at California’s Old Mission San Juan Capistrano, continue to be best sellers at the California Missions, and are found in many libraries throughout California as standard references. By his parishioners and college students alike, Father Kammerer will be remembered as a tireless educator and promoter of Catholic education. A bibliophile, Father Kammerer collected a huge library over the years, a great many titles in history and art that he used constantly in the classroom. The entire collection along with the many historic artifacts he acquired in his long teaching career will now be housed in Chatfield College’s library. He was preceded in death by his parents Raymond and Clara Kammerer. He is survived by his sister Rosemary (Mark) Schlachter; one niece Abby (Jason) Langdon; three nephews Kurt (Sandra) Schlachter, Kameron Schlachter, and Max (Courteney Orr) Schlachter; one great nephew Broderick Langdon; two great nieces Kalli Langdon and Lilah Schlachter; and special caregiver Helena Baker. A visitation will be held 5:00 PM – 8:00 PM Thurs., Jan. 9 at St. Augustine Catholic Church in Waynesville. A second visitation will be held 9:00 AM - 10:30 AM Fri., Jan. 10 at Stubbs-Conner Funeral Home in Waynesville, followed by a Mass of Christian Burial service 11 AM Fri. at St. Augustine Catholic Church. Following a luncheon at the church, a committal and graveside service will be held 2:30 PM Fri. at Saint John the Baptist Cemetery in Cincinnati. Stubbs-Conner Funeral Home in Waynesville is serving the family. If desired, contributions may be made to the Chatfield College to be added to the Father Raymond Kammerer Memorial Scholarship Fund. Condolences at www.stubbsconner.com.

KAMMERER, Father Raymond, age 81, of Waynesville, passed away Sat., Jan. 4, 2020 at his residence. Father Kammerer earned graduate degrees from both the Athenaeum of Ohio (Mount Saint Mary&#8217;s of the West) and Xavier University in Cincinnati.... View Obituary & Service Information

The family of Father Raymond Kammerer created this Life Tributes page to make it easy to share your memories.

Send flowers to the Kammerer family.