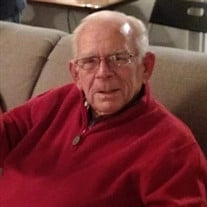 PATTON, Raymond “Ray” Isaac, known locally as the “watermelon man,” age 82, went to his Heavenly Home on Sunday, July 4, 2021, surrounded by his loving family. Ray was born in London, KY to Wendall and Nuba Grimes Patton in August 1938. He was one of nine children. His grandfather Grimes had a great influence on his life, whereby he would buy and sell produce which started Ray’s love of the business. At the age of 14, he allowed Ray to drive his truck. Ray spent over sixty years as an owner/operator of Patton Services, Inc. and retired as president of Ray Patton and Sons Watermelons. Known as the “Watermelon Man,” he traveled to Florida, Georgia, and Indiana to transport the best fruit. While the 4th of July holiday was his busiest time for hauling watermelons, he supplied groceries stores, markets, friends, and family all season long during the warmer months. In fact, watermelon season was his favorite time of year, by allowing him to spend time with his sons and to see his old friends. A man with a high work ethic, Ray loved working and was always hauling something in his truck. He recruited friends, neighbors, and family to assist him over the years, whereby many men can say they learned to work hard by Ray’s example. He lived in Atlanta from the 80’s where he and Joyce made their home. In addition, Ray supported Joyce’s love for the Daughters of the American Revolution by attending State Conferences and Continental Congress in D.C. He was a 20 year member of the Sons of the American Revolution. He is preceded in death by his parents, Robert Wendall and Nuba Grimes Patton; and sisters, Alpha Patton Woods, Elizabeth Patton Smith, and Eula Mae Patton Tyree. Ray is survived by his loving wife, Joyce Ball Patton; sons, Todd (Brenda) Patton of Waynesville, Troy (Bonnie) Patton of Springboro, and  Bryan (Berneda) Patton of Wilmington; grandchildren, Jeremy (April) Patton, Carrie (John) Jarrells, Lacey (EJ) Lamb, Kyle (Lauren) Patton, McKenzie Patton, and Brayden Patton; 11 great grandchildren; sisters, Willetta Patton Brock, and Judy (George) Adams; brothers, Edward Patton, Fred (LouAnn) Patton, and Millard Patton; several nieces, nephews, and many special friends; and Ray’s constant companion, Sugar Ray. A visitation will be held from 5:00 – 7:00 PM on Thursday, July 8, 2021, at Johnson-Arrowood Funeral Home in Tennessee. A funeral service will be held at 7:00 PM in Tennessee with Rev. Don Ingram, Rev. George Adams and Rev. Robert Patton officiating. To view the service live, please go to www. johnsonarrowood.com/obituaries/raymond-ray-isaac-patton/1818/ and it will be available at 7:00 PM. A second visitation will be held 11:00 AM - 2:00 PM Saturday, July 10 at Stubbs-Conner Funeral Home in Waynesville, followed by a committal service at 2:30 PM at Miami Cemetery in Corwin. In lieu of flowers and in Ray’s memory, memorial contributions may be made to the Miami Cemetery Association, 6379 Corwin Avenue Waynesville, OH 45068 and/or NSDAR President General’s Project: In Care of the Treasurer General NSDAR 1776 D Street NW Washington, D.C. 20006. Condolences at www.stubbsconner.com.

The family of Raymond "Ray" Isaac Patton created this Life Tributes page to make it easy to share your memories.

Send flowers to the Patton family.