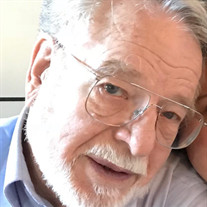 ALMANRODE, Richard “Rick” LaMont, age 76, of Centerville, passed away peacefully Monday, March 4, 2019. Rick attended Art School at the Dayton Art Institute, received a Bachelor’s Degree in Art Education from the The University of Dayton, and a Master’s Degree in Education from Wright State University. He taught 6th - 9th grade art at Mad River Schools where his students affectionately called him “Mr. AlmanToad.” As an artist, his media of choice was clay. He loved to create with his hands and always had an affinity to perfectly display his art and and antiques. His joy for the the hunt started at age five with his first trade of his comic book collection for a Native American arrowhead. Getting up extra early before teaching school many days, and especially after he officially retired from teaching, he pursued his artistic passion in the antiques business. He loved antiques and became an expert in his field. He was often called upon by others to assist in distinguishing the history and value of unusual treasures. Over his 59 years in the business, he owned several antiques stores in Waynesville and Lebanon, and along the way formed countless meaningful relationships. Rick was a very eclectic person and appreciated a plethora antiques, including paintings, rugs, folk art, etc. He specialized in 18th century American furniture and accessories, American Indian art, paintings, art nouveau, and art deco. Walking through one of his shops was an experience so profound, it is practically indescribable. Described as kind, gentle, giving, hospitable, nurturing, and loving, he knew no strangers. He greatly enjoyed nature, fishing, gardening, and living an organic lifestyle. During his teaching years, he spent every summer break in the great outdoors of Canada. He proudly considered himself a survivalist and often reminisced about one particular summer he spent over 78 days living a simple life as a part of Mother Nature. For him and his wife, it was love at first sight. They traveled all over the country for antiques shows, and, with their daughter, they enjoyed all of the beauty this country and it’s parks have to offer. After the birth of his daughter, whose name means “her father rejoices,” he used his free time to become a “Mister Mom” of sorts, befriending all of the moms at ballet and soccer practice. He quickly introduced his daughter to antiques and she became his business partner and travel buddy. Those who know him have certainly been blessed to hear one of his favorite phrases like “let something good happen,” “I love love,” and “buy in the light, sell in the dark.” Rick was always sure as to where he was going and referenced Heaven as “the big antiques shop in the sky!” and joked that he hoped he wasn’t going to “the big pottery!” He was preceded in death by his parents Ray and Ellen Boman. He is survived by his wife of 23 years, Linda Castiglione; daughter Abby Almanrode; and two sisters Barbara (John) Ambrose and Joan (Robert) Boman-Powers and loving niece Michelle “Shellie” Powers. Funeral services 11 AM Fri. March 8 at Stubbs-Conner Funeral Home in Waynesville. Burial will be in Miami Cemetery, Corwin. The family will receive friends 5-8 PM Thurs. at the funeral home. If desired, contributions may be made to the National Wildlife Federation. Condolences at www.stubbsconner.com.

The family of Richard "Rick" LaMont Almanrode created this Life Tributes page to make it easy to share your memories.

Send flowers to the Almanrode family.