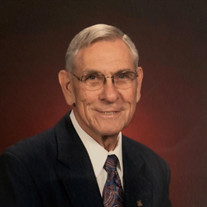 DICK, Richard A., age 85, of South Lebanon and formerly of Waynesville, passed away Sunday, November 29, 2020 at Bethesda North Hospital. Richard was a United States Army veteran. He retired from System Research Laboratories after 30 years of service. He was a member of the South Lebanon First Church of God. Kind-hearted, giving, and loving, Richard was fun to be around and loved God. He was quite handy and enjoyed fixing things around the house, even building his own home in recent years. He loved playing the guitar and singing, mainly gospel music in church. Some of his favorite memories included traveling back home to Hinton, West Virginia for his elementary school class reunions. Among many things, he will be remembered for his love of the mountains of West Virginia and taking car journeys to see the fall foliage. He was preceded in death by his parents Hobert and Maycle Dick; his brother Jack Dick; and sister Dorothy Walker. He is survived by his wife, Shelby; three sons Curtis Dick, Kenneth (Karen) Adkins, and Tim Colyer; three daughters Faye (Jim) Gibson, Yvonne Dick, and Sherry (Donald) Padgett; nine grandchildren; and nine great grandchildren. Funeral services will be held 1 PM Thursday, December 3 at Stubbs-Conner Funeral Home in Waynesville. Burial will be in Miami Cemetery, Corwin. Tom Chattin will be officiating the services. The family will receive friends 11 AM - 1 PM Thursday at the funeral home. During this difficult time, if you are feeling ill or unhealthy in any way, you are encouraged to pay your respects in alternative methods, such as sending a sympathy card or sharing a memory though our online tribute wall. In addition, the services will be streamed live via the internet. If you wish to view the services on the live stream, please reach out to the funeral home to be added to the list. Be sure to bring your mask to wear while you are inside the funeral home. Condolences at www.stubbsconner.com.

The family of Richard A. Dick created this Life Tributes page to make it easy to share your memories.

DICK, Richard A., age 85, of South Lebanon and formerly of Waynesville,...

Send flowers to the Dick family.