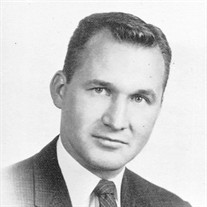 GITHENS, Richard L., age 88, of Clearcreek Township, peacefully transitioned this life on Thursday, May 13, 2021 at Bethany Lutheran Village in Centerville. Richard, one of 11 children, grew up during the depression working on his parent’s farm in Clearcreek Township, Ohio, which had been in his family for several generations. He worked long days on the farm which helped to form his exceptional work ethic. Growing up during the depression, when the motto was “use it up, wear it out, make do or without”, helped shape Richard’s personality to be humble, thoughtful, helpful, and thrifty. He attended the Springboro, Ohio school system and after graduating high school, Richard served his country during the Korean Conflict in the United States Coast Guard as a radio operator, mainly in Alaska and the Boston, Massachusetts area. After being honorably discharged from the Coast Guard, he put himself through college at The Ohio State University, where he met Elizabeth, his loving wife, and earned a Bachelor’s Degree in Dairy Technology. He then started working for Borden Dairy while pursuing his graduate education. His work resulted in him and his family living for a time in Columbus, Ohio and later, in Lexington, Kentucky. He eventually returned to the area, first living in Centerville, Ohio and then moving back to Clearcreek Township in 1977 to live on a portion of what was the original family farm, where he lived the rest of his life. Richard worked for Borden Dairy for 30 years, much of that time as a plant manager. After retiring in 1989, he stayed active and continued working as a consultant for food production plants. After he retired from his professional career, he worked part time as a school bus driver for Springboro School District. Over the years, he was a member of the Cincinnati Dairy Technology Society, the Dayton Toastmasters Club, American Quarter Horse Association, and was elected to, and served on, the Springboro School Board. Richard was reserved but had a good sense of humor, which he maintained even throughout his long illness. He was a great provider for his family. He owned many dogs throughout the years, but Heidi, their Swiss Mountain Dog, was most special to him. After turning 40 years old, he took up jogging almost daily, participating in multiple biathlons, and completed the Columbus marathon at the age of 59. He mentored young boys from Warren and Montgomery Counties for many years. He enjoyed training and riding horses, camping and the outdoors, reading American history and western novels, vegetable gardening, genealogy, playing cards with friends and family, catching up with family at reunions, and travel. He took pleasure in watching The Ohio State Buckeyes football games, the Cincinnati Reds and attending Dayton Dragons baseball games, particularly when they won. He was a ham radio operator, call sign KC8CKP. While serving in the Coast Guard in Alaska, he grew a love for the state and returned several times during family trips. His other favorite travel locations included the western states of the U.S. and Europe, with France and Italy being among his favorites in Europe. He collected western themed art and Native American Indian artifacts. Among many things, the many family camping trips he organized will always be remembered as some of his fondest times. He was preceded in death by his parents Charles Lester and Orpha Githens; five brothers: Paul (Aileen), John (Juanita), Charles (Lois), Carl (Phyllis), and Larry Githens; and two sisters Joan (Leroy) Wolfe and Ruth Greiner. He is survived by his wife of 62 years, Elizabeth “Liz” (Piotrowska); son Richard “Rick” Githens; daughter Deborah “Debbie” (Michael) Wietzel; three grandchildren Halle, Cameron, and Owynn Githens; three sisters Dorothy Githens, Marti (Dick) Morgan, and Linda (John) Wasleff, numerous nieces and nephews, and his good friends, Dick and Evelyn Blackstone. Richard’s family wishes to express their heartfelt thank you to Hospice of Dayton and the staff at Bethany Lutheran Village for the excellent care he received. Funeral services will be held 1 PM Thursday, May 20 at Stubbs-Conner Funeral Home in Waynesville. Burial will be in Miami Cemetery, Corwin. Steve Wetterhan will be officiating. The family will receive friends 11 AM - 1 PM Thursday at the funeral home. In lieu of flowers, contributions may be made to Hospice of Dayton. Condolences may be shared at www.stubbsconner.com.

GITHENS, Richard L., age 88, of Clearcreek Township, peacefully transitioned this life on Thursday, May 13, 2021 at Bethany Lutheran Village in Centerville. Richard, one of 11 children, grew up during the depression working on his parent&#8217;s... View Obituary & Service Information

The family of Richard L. Githens created this Life Tributes page to make it easy to share your memories.

Send flowers to the Githens family.