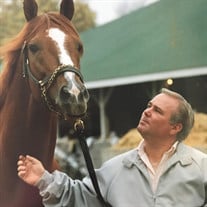 Richard (Dick) Joseph Lundy, Jr., age 71, of Waynesville, passed away peacefully on October 5, 2019 at his home. Dick, who was originally from North Salem, New York, was a world-class thoroughbred racehorse trainer with operations in New York, California, Florida and Ohio, and well-known globally throughout the racing industry. Before that, Dick was an accomplished equestrian training the hunter/jumper circuit in California. After serving in the United States Air Force during the Vietnam War, Dick began his career in the thoroughbred horse racing industry working under several Hall of Fame trainers in New York and Southern California. His early days were spent on the east coast with many appearances in the winner’s circle bringing with it much notoriety. Dick worked with many public and private stable operations during his career, earning purses of over $17 million. After leaving the thoroughbred horse racing industry, Dick became president of a private company specializing in health-related supplements until his retirement. Following retirement, Dick along with his wife Suzy, began a business operation, Kennel Des Les Anges in Waynesville. In addition to the boarding operation, Dick and Suzy were passionate working with and developing young dogs. Among others, they were fortunate to work with Fifi, the Doberman who made it to the final round at the Westminster Dog Show in 2011. Dick also had a passion for training and trialing sheep dogs. Dick carried this passion to serving as president of the Dayton Dog Training Club. In his free time, Dick greatly enjoyed his annual bow hunting trips. Dick was always known for his kindness and he became a mentor to so many people in their careers. He will long be remembered for his God given gift of training animals, and his compassion for taking in and caring for animals when needed. He was preceded in death by his parents Richard Joseph and Lucia Lundy. He is survived by his wife of twenty years, Suzannah Howard Lundy; brothers Gary (Sue) Lundy and Marty (Terry) Lundy and; nieces and nephews Graig Lundy, Bryan Lundy, Mark Lundy, Julie Zarro, Kathleen Howard, Matthew Howard and; Dick’s loyal dog Seth. A celebration of life service will be held 3:00 p.m. Saturday, October 26 at Stubbs-Conner Funeral Home in Waynesville. The family will receive friends from Noon to 3:00 p.m. on Saturday, October 26 at the funeral home. If desired, contributions may be made to Old Friends Equine, 1841 Paynes Depot Rd., Georgetown, KY 40324. Condolences at www.stubbsconner.com.

Richard (Dick) Joseph Lundy, Jr., age 71, of Waynesville, passed away peacefully on October 5, 2019 at his home. Dick, who was originally from North Salem, New York, was a world-class thoroughbred racehorse trainer with operations in New... View Obituary & Service Information

The family of Richard Joseph Lundy Jr. created this Life Tributes page to make it easy to share your memories.

Send flowers to the Lundy family.