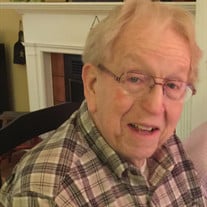 PHILPOTT, Richard “Dick” H., age 84, of Waynesville, passed away Tuesday, September 8, 2020 at Miami Valley South Hospital. Dick was born November 18, 1935 in Springfield, Illinois to Les and Jean Philpott. He graduated from Bloomington High School, class of ’53, and from Weselyn University in Illinois. While attending college, he was a member of the Phi Gamma Delta Fraternity. He served in the Army Reserves from 1953-1963, the later part serving as one of the instructors. He worked over 40 years in the insurance industry, first at State Farm, the majority of his time at Mutual of Omaha, and ultimately retiring as an underwriter working on his own. He was well known by family and friends for his natural ability to sell anything. Dick was a 50 year member of the Masonic Lodge. He was elected and served several years on the Waynesville Village Council, whereby he assisted in recruiting the current chief of police to the town. He was also a member of the Waynesville Rotary Club, where he helped lead the booth during the Ohio Sauerkraut Festival for several years. After serving his time on the village council, Dick would often attend and participate as an audience member in several other local government and civil organizations, including the Wayne Local School Board. He was very interested in local politics and actively supported his community and community members for several years. Among his several contributions, he donated money for band uniforms at the school. In addition, he supported the school for many years by attending almost all of the high school boys and girls basketball games and the high school football games. He greatly enjoyed traveling to games with his good friend, Gail, over the years as well. Quick-witted, happy, funny, and highly intelligent, Dick had a big sense of humor, a great laugh, and was a stranger to no one. He had a big personality, loved to talk and tell stories, and was very passionate about his beliefs - well known for arguing his point of view with the best of people. During his younger days, he was quite ornery and was even referred to by his mother as a “stinker”. In the 1940’s and 50’s, he was a crewman and boat driver for a hydroplane boat racing team in Illinois. He could fix and build anything, even building a home on a couple on occasions. In addition, he had a kitchen design that he created make it in the top 10 list of Better Homes & Gardens magazine on three separate occasions in 1960, 1961, and 1962. His talents also included the ability to play the bugle. Paid travels with his wife to Europe and other locations via his insurance jobs, gave them several fond memories. In his later years, he learned to fly at Waynesville’s Red Stewart Airport, assisting his wife in her antique store, attending horse shows with his granddaughter, and spending time with all of his grandchildren. He also enjoyed catching up on the local news with the group from McDonald’s. After his injury, he loved taking rides in the car to go out for dinner, visiting the Butter Churn Cafe in Waynesville, and sitting out in front of his home to waive at friends. He was preceded in death by two daughters Nancy Lebsock and Kim Slater and his parents. He is survived by his wife, Lee; two sons Don Philpott and Eric (Daphne, who Dick affectionally called “Queen”) Philpott; 10 grandchildren Kristen, Katie, Danny, Emily, Sarah, Alicia, Megan, Ciera, Michael, and Chris; eight great grandchildren Kaleb, Logan, Isabelle, Nolan, Audrey, Greyson, Harrison, and Elin; and one brother Jerry (Kathy) Philpott. A celebration of life service will be held 3 PM Saturday, September 12 at Stubbs-Conner Funeral Home in Waynesville. The family will receive friends 1 -3 PM Saturday at the funeral home. If desired, contributions may be made to the Lytle United Methodist Church. During this difficult time, if you are feeling ill or unhealthy in any way, you are encouraged to pay your respects in alternative methods, such as sending a sympathy card or sharing a memory though our online tribute wall. In addition, the services will be streamed live via the internet. If you wish to view the services on the live stream, please reach out to the funeral home to be added to the list. Be sure to bring your mask to wear while you are inside the funeral home. Condolences at www.stubbsconner.com.

The family of Richard "Dick" H. Philpott created this Life Tributes page to make it easy to share your memories.

Send flowers to the Philpott family.