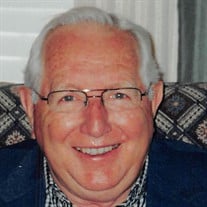 AMBURGY, Robert F., born Dec. 30, 1931 in Booveville, KY to Cortous and Edna (Brandenburg) Amburgy. Bob’s mother died when he 18 month’s old. He lived with his dad and grandparents until age 7, upon which time his dad married Mattie Stewart. Mattie was a loving stepmother and Bob gained a sister, Jo Ann, and a brother, Wendell Ray. He moved to Ohio with his parents when he was 10 years old. Bob graduated from high school, followed by barber college. He owned and operated barber shops in Oakwood and Lebanon for many years. Bob married Eva Combs and they had two children, a daughter Kimberly and a son Kevin Scott. His wife passed away in 1970. In 1973, he married again to Anna Jones. Bob earned his Realtor’s license while barbering and worked as part-time Realtor, ultimately deciding to focus more on his Realtor career. He sold his barbershop to his brother and opened a real estate office in Lebanon. He went on to get his broker’s license and continued in real estate for many years. In addition, he built some custom homes and commercial buildings. His love of barbering remained however, so he continued to barber part-time. Joining the Gideon ministry in 1983, bob worked in many Gideon positions over the years. He had a passion to place God’s word in motels, schools, and all other places Gideons are allowed to go. He wanted everyone to have a Bible and come to know Christ as Savior. He loved to visit pastors in Warren County to acquaint them with the Gideon ministry and to encourage them in their work for the Lord. Bob and Ann bought a fifth wheel in the mid nineties and made long trips all over the U.S. and Canada. When it got too hard to take the camper, he sold it and bought a home in Eustis, FL, where they spent about five months each years. He was preceded in death by his former wife, Eva Combs; son Kevin Scott Amburgy; mother Edna Brandenburg; parents Cortous and Mattie Amburgy; grandparents Frank and Cressie Brandenburg and Robert and Callie Amburgy; sister Jo Ann Ellis; and niece Jenifer Reese. He is survived by his wife, Anna Amburgy; daughter and son-in-law Kimberly and Bob Borders; grandchildren Robert Michael (Christine) Borders, Kyla Ann Borders (her special friend Gerald), Lauren Angelina Unser, Kristin Marie (Jorie) Johnson, and Ema Grace Hollett; sister-in-law Ruby Bunch; and many nieces and nephews. Funeral services will be held 1 PM Tues. May 28 at Stubbs-Conner Funeral Home in Waynesville. Burial will be in Miami Cemetery, Corwin. Mark Jackson will be officiating the services. The family will receive friends 11 AM - 1 PM Tues. at the funeral home. In lieu of flowers, contributions may be made to Gideons International, PO Box 612, Lebanon, OH 45036. Condolences at www.stubbsconner.com.

AMBURGY, Robert F., born Dec. 30, 1931 in Booveville, KY to Cortous and Edna (Brandenburg) Amburgy. Bob&#8217;s mother died when he 18 month&#8217;s old. He lived with his dad and grandparents until age 7, upon which time his dad married... View Obituary & Service Information

The family of Robert F. Amburgy created this Life Tributes page to make it easy to share your memories.

Send flowers to the Amburgy family.