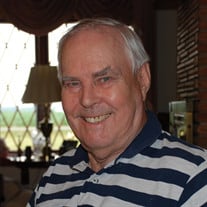 GEORGE, Robert “Bob” D., age 86, of Waynesville, passed away Sat. Sept. 15, 2018 at Kettering Hospital. Bob graduated from Kingman High School, class of ’50, and was a Korean Conflict Navy veteran. A lifelong farmer, he spent his entire life working at the farm that he grew up on. He also owned and operated Mechaneer Inc. of Dayton, and officially retired after more than 20 years of service in the tool and die industry. Somewhat reserved with a good sense of humor, Bob was intellectual, mechanically inclined, and always enjoyed a good debate with someone. In addition to farming, he also enjoyed history, airplanes, riding his motorcycles, and playing softball. He and his wife traveled the world, exploring a new location during each trip. The more memorable trips included the many ocean cruises and the time they hit $5000 in Vegas. He was a great cook, especially when it involved a grill, and took particular interest in culinary activities. He will be remembered for his homemade vegetable soup, beef stroganoff, and ham hocks. He was preceded in death by his parents Everett and Freda George; three brothers Terry, Mike, and Ted George; and three sisters Sue Ann Combs, Marilyn Plummer, and Judy Suttles. He is survived by his wife of 47 years, Betty; two sons Mike (Jennifer) George and Mark George (fiancee Erica); three grandchildren Ryan (Lindsay) George, Mary George, and Ethan George; two great grandchildren Paxton and Emersyn; two brothers Joe (Donna) George and Doug (Cleta) George; and three sisters Vicki (Denny) McCarren, Carol Lee Blankenship, and Mary Annette (John) Meadows. Funeral services will be held 11 AM Thurs. Sept. 20 at Stubbs-Conner Funeral Home in Waynesville. Burial will be in Miami Cemetery, Corwin, OH. The family will receive friends 6-8 PM Wed. at the funeral home. If desired, contributions may be made to the Wounded Warriors Project. Condolences at www.stubbsconner.com.

The family of Robert "Bob" D. George created this Life Tributes page to make it easy to share your memories.

Send flowers to the George family.