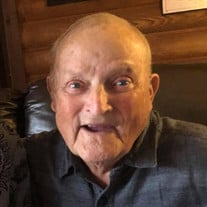 SHERWOOD, Robert K., age 91, of Waynesville, passed away Saturday, January 15, 2022, at the Laurels of Milford. Bob was a 1948 graduate of Waynesville High School. He honorably served as a platoon leader in the United States Army during the Korean Conflict. A lifelong farmer, Bob grew up working with his parents on the farm and ultimately spent his entire life tending to their land. He preferred staying on the farm, never venturing away for vacations or trips, concluding that the time he served in the Army in Korea was enough to convince him that his home farm in Waynesville was better than any adventure away. Tenderhearted, outgoing, extremely hardworking, and always true to his word, Bob was strong and tough as nails. His infectious and recognizable laugh will be missed by all who knew him. Until his later years, when he took up flower and vegetable gardening, his hobbies centered around farming, which he loved. He also enjoyed attending auctions and would often buy mowers, tractors, and other notable items whenever the deal was right. Over his long lifetime, he grew quite an impressive collection of mowers, tractors, and trucks. His favorites included a vintage International 1 ton truck and a Farmall 400 tractor. Among many things, he will be remembered as the second dad to 13 nieces and nephews and a loving companion to his dog, “Hey”. A simple man, Bob was asked one time why he named his dog, “Hey”, and he answered by saying that his dog became attentive to him whenever he said, “Hey”, so the name stuck. He was preceded in death by his parents, Carleton E. and Mildred Sherwood; two brothers, Nelson and Carleton “Junior” B. Sherwood; three deceased nephews; and one great-nephew. He is survived by his sister, Vera Suchy, ten nieces and nephews, and several great-nieces and nephews. Funeral services will be held at 1 PM Friday, January 21 at Stubbs-Conner Funeral Home in Waynesville. Burial will be in Miami Cemetery, Corwin. Rod Walley will be officiating the services. The family will receive friends 12 - 1 PM Friday at the funeral home. Condolences at www.stubbsconner.com.

SHERWOOD, Robert K., age 91, of Waynesville, passed away Saturday, January 15, 2022, at the Laurels of Milford. Bob was a 1948 graduate of Waynesville High School. He honorably served as a platoon leader in the United States Army during the... View Obituary & Service Information

The family of Robert K. Sherwood created this Life Tributes page to make it easy to share your memories.

Send flowers to the Sherwood family.