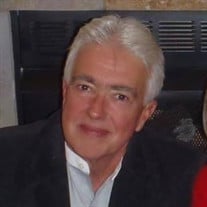 WOODY, Sr., Robert “Bob” A., age 71, of Waynesville, passed away Sunday, November 14, 2021, at his residence. Bob was born May 30, 1950, to Elmer and Willena Woody in Cincinnati. He graduated from Mason High School, class of ’68. He served his country honorably in the Army during the Vietnam era. He worked 22 years as a signal maintainer in the railroad industry for Conrail and officially retired from Qwest Communications in 2010 after more than 10 years of service to the company. He was a member of the Fraternal Order of Eagles #2062 in Lebanon. Loyal, hardworking, and devoted to his family, Bob’s pride and joy was supporting his grandchildren with their extracurricular activities. In addition to never missing a game, he became their “Uber driver” in this modern world of one child going one place to play a game and the next one going to another. Many boys from his younger days will remember that he coached baseball for Waynesville High School for several years. During his coaching days, he was active with and served as president of the Waynesville Athletic Booster for several years. Bob had an incredible work ethic and made sure his family never went without, even when he was laid off from the railroad back in the day. During that time, he took on a paper route and several mowing jobs to ensure his family was cared for. He enjoyed those years with the paper route, and if you know Bob, you certainly know that mowing was way more of a fun hobby than a chore. He was even known to mow the lawns of friends and family, sometimes a second time for visual effect, simply for enjoyment. He also liked to ride ATVs, which for many years, he and some friends traveled to LaFollette, Tennessee for riding. In his free time, he enjoyed watching NASCAR and especially the Cincinnati Reds. It became a tradition for him and his wife to host Thanksgiving and Christmas at their home, which will always be remembered fondly. Among many things, he will be remembered for how much he enjoyed the years he owned the lake house at Norris Lake in Tennessee, which resulted in priceless family memories of boating, grilling, and nightly games. He is survived by his loving wife of 35 years, Button; four sons, Rob (Angie) Woody, Jeff Woody, Pat (Kendra) Foley, and Chris Foley; six grandchildren, Nathan and Brooke Woody, Loren, Jenna, and Sean Foley, and Lane Foley; and his brother, Larry (Zandra) Woody. The family will receive friends 5 - 7 PM Tuesday, November 23 at Stubbs-Conner Funeral Home. A celebration of life service will be held at 7 PM Tuesday, November 23 at the funeral home. Celebrant Katie Mackoway will be officiating the services. If desired, contributions may be made to Ohio’s Hospice of Dayton. Condolences at www.stubbsconner.com.

The family of Robert "Bob" A. Woody Sr. created this Life Tributes page to make it easy to share your memories.

Send flowers to the Woody family.