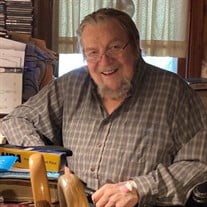 Pastor Roger W. Hilbert II, age 84, of Cincinnati, passed away Sunday, March 20, 2022, at the Jewish Hospital in Cincinnati. Roger graduated from Deer Park High School, class of ’55. He honorably served in the United States Air Force in Germany during the time the Berlin Wall was erected. He later earned a Bachelor’s Degree from the University of Cincinnati in Logistics and Marketing in 1969. He worked nearly 20 years for Baldwin Piano and Organ Co. and nearly 20 more years for Southwestern Ohio Steel before retiring in the late ‘90s. More importantly, he agreed to fill in as pastor for Jonah’s Run Baptist Church near Harveysburg but ultimately served as their pastor for the past 27 years. He always felt that there was something special about this little church and the congregation. To this day, it has maintained its special feel, mostly due to the stability and dedication that Roger gave and received back every Sunday. In addition, he was a member of the Madisonville-Maderia-Mariemont Masonic Lodge #419. Always positive and upbeat, Roger described himself best when people asked how he was doing, saying, “I’m fantastic and getting better!” He worried about nothing, was the definition of an optimist, had enormous faith in God, and had a way of making everyone he knew, especially his family, feel good and calm in strife. He was the anchor of his family. He eloquently described himself as the happiest person he knew. He was a private pilot. His other hobbies included carpentry and mechanics, which led him to fix his own cars and build additions to his home. In addition, he greatly enjoyed blacksmith work with his son. He was preceded in death by his parents, Roger and Flora Hilbert. He is survived by his wife of 61 years, Mary Beth; daughter Laura (Ron) Hetzer; son Roger (Meredith) Hilbert III; four grandchildren Audrey Hilbert, Alex Hilbert, Caleb Hetzer, and Ben Egbert; and one sister Karen Brackemyre. The family will receive friends 11 AM - 1 PM and a celebration of life service will follow at 1 PM Saturday, March 26 at Jonah’s Run Baptist Church, 9614 State Route 73 West, Wilmington, OH 45177. Kirk Mootispaw will be officiating. Stubbs-Conner Funeral Home in Waynesville is serving the family. If desired, contributions may be made to the Jonah’s Run Baptist Church. Condolences at www.stubbsconner.com.

The family of Pastor Roger W. Hilbert II created this Life Tributes page to make it easy to share your memories.

Send flowers to the Hilbert family.