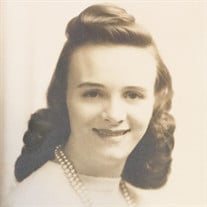 BROWN, Ruth (Barger) was welcomed into Heaven on April 19, 2018 in St. Petersburg, Florida. She was born on August 5, 1923 in Hamilton, Ohio to the late Thomas and Daisy Barger. On July 26, 1944, she married Harold P. Brown (deceased) in Beavercreek, Ohio. She is survived by her sisters-in-law Rosemary (Brown) McCarthy and Winnie (Barger) Wagner; son Steven (Christine) Brown; daughters Deborah (Michael) Galante and Victoria (Phillip) Dickhaus; grandsons Scott (Lisa) Brown, Matthew (Paula) Brown; granddaughters Jenipher (Douglas) Kelly, Chandra Galante, Candice (Ricardo) Santos, Andrea (Joseph) Sango, Elizabeth Brown, Amy (Peter) McDaniel, Ashley (Nathan) Brown, Abigail (Christopher) Pratt, and Autumn (Brian) Wang; and 22 great-grandchildren. In addition to her parents, she was preceded in death by her siblings Ellen Barger, Cecil Barger, and Thomas Barger. Ruth lived a long and full life, a quintessential American story. Blessed with strong Hazard, Kentucky genes, she was born during the Roaring Twenties, survived the Great Depression, and married during World War II. She saw her husband join the Marines to fight in the Pacific, was a member of the Greatest Generation, and participated in the Baby Boom, having three children from 1947 – 1957. She witnessed history as it was made. What her great-grandchildren learn in school, she experienced firsthand. She cherished time with her family and enjoyed regaling stories of her experiences, so that her story would survive for generations to come. Ruth was the foundation upon which her family was built, strong and independent. She was compassionate and generous, loving and kind, a selfless servant devoted to family. These attributes, and more, were instilled in her children from an early age and have been passed on to her grandchildren and great-grandchildren. She was loved and will be missed by many, yet her family is comforted with the knowledge that she now resides in Heaven, where they will be reunited. “Faith is the substance of things hoped for, the evidence of things unseen.” Hebrews 11:1. Funeral services 11 AM Friday, April 27, 2018 at Stubbs Conner Funeral Home in Waynesville. Burial will be in Miami Cemetery, Corwin. Condolences at www.stubbsconner.com.

BROWN, Ruth (Barger) was welcomed into Heaven on April 19, 2018 in St. Petersburg, Florida. She was born on August 5, 1923 in Hamilton, Ohio to the late Thomas and Daisy Barger. On July 26, 1944, she married Harold P. Brown (deceased) in Beavercreek,... View Obituary & Service Information

The family of Ruth Brown created this Life Tributes page to make it easy to share your memories.

Send flowers to the Brown family.