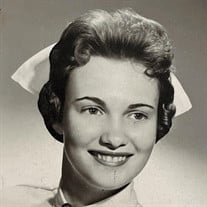 COOPER, Ruth M. Reker Hetzel, age 80, of Beavercreek and formerly of Westerville, passed away Tuesday, March 22, 2022, at Hospice of Dayton. Ruth graduated from Charles F. Brush High School in South Euclid, Ohio, class of 1959. She received a nursing degree from the Lutheran Hospital School of Nursing in Cleveland in 1962. In the early ‘90s, she returned to school and earned a Bachelor’s Degree in Business from Otterbein University in 1994. She worked over 20 years at St. Anthony (later Park) Medical Center in Columbus and retired from Worthington Christian Village after more than 25 years of combined work in nursing. For many years, she was a faithful member of Gethsemane Lutheran Church in Columbus. More recently, she was a member of Concordia Lutheran Church in Oakwood. Practical, straightforward, fun, and intelligent, Ruth had a great sense of humor, a beautiful smile, and understood the importance of a good education. She greatly enjoyed travel, reading, watching theatre productions at Otterbein, and especially spending time with her family. She was a kind and loving mother and grandmother. Born on Pearl Harbor Day, she traveled twice to Hawaii and found the islands historically interesting and beautiful. Other travel locations that she loved included Turkey, Alaska, South Carolina, and especially Greece. She developed MS later in life and was glad she’d had the opportunity to see the world while she could. She spent her later years at Trinity Community at Beavercreek, where she was still able to be a special part of the lives of her daughters and grandchildren. She was preceded in death by her parents, Arthur and Emma Reker, and her brother and sister-in-law, Arthur and Virginia Reker. She is survived by her two daughters, Susan (Dennis) Gray and Julie (Shannon) Miller; two grandchildren, Alyssa (Ryan) Stephens and Ethan Miller; and nephews, Mike, Bill, and Tom Reker and their families. Private family services at a later date. Stubbs-Conner Funeral Home in Waynesville is serving the family. If desired, contributions may be made to Hospice of Dayton or Trinity Community at Beavercreek. Condolences at www.stubbsconner.com.

The family of Ruth M. Cooper created this Life Tributes page to make it easy to share your memories.

Send flowers to the Cooper family.